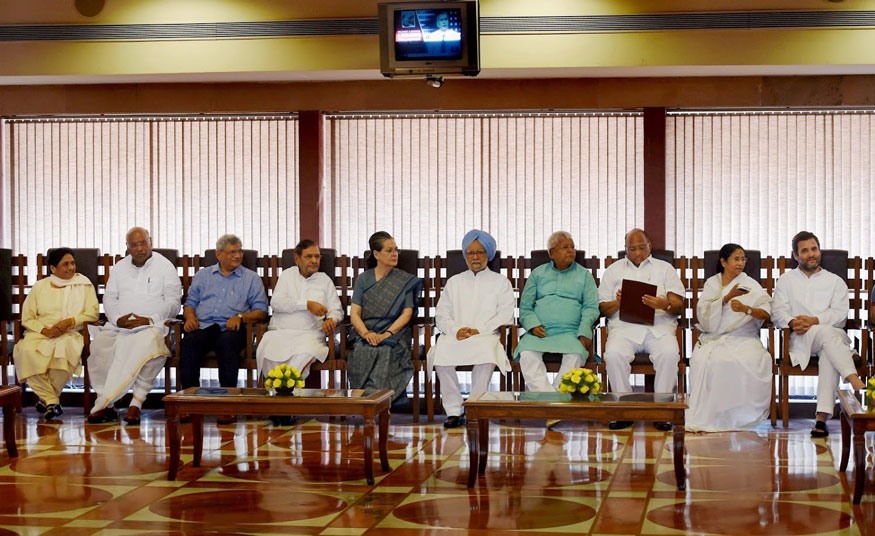 The all party meet held on 26 May, turned into an attempt to bring unity among 17 opposition parties against Modi-led government.

The all party meet which was tactfully converted into a ‘social bonding over lunch’, held on 26 May, by Congress president Sonia Gandhi, turned into a larger attempt to forge unity among 17 opposition parties against the Narendra Modi-led government. Though the meeting was called to finalise the opposition’s common candidate for the presidential election, the leaders present at the meeting did not come up with specific names. They agreed on the need for a consensus on the opposition’s candidates for the election of the President as well as the Vice-President.

BSP chief Mayawati said that some people believe that Behenji (as she is popularly called) is walking alone, but it is not so, she promised that she will walk with the united opposition and not alone. She said it was the need of hour for opposition to come together to fight the BJP and develop an effective strategy for it.

Trinamool Congress leader Mamata Banerjee strongly backed RJD president Lalu Prasad Yadav, who appealed to all those parties against BJP to attend his grand opposition rally in Patna on August 27.

Janata Dal (United) leader Sharad Yadav, spoke aggressively on the crisis in Kashmir at the meeting. In his statement to ET he also told that, Mayawati was most worried about UP while Mamata was impressed on all the opposition parties coming together despite all the differences.

Rashtriya Janata Dal chief Lalu Prasad Yadav said that, BJP won the elections in UP because of division of vote. He said that if Samajwadi Party and Bahujan Samaj Party would have been together, they would account for 52% of the votes. He further urged both the parties to come together ahead of the 2019 Lok Sabha election. He also suggested to Sonia Gandhi that Manmohan Singh should be used more actively by Congress and that Aam Aadmi Party leader Arvind Kejriwal, should also be called for such meetings.

West Bengal Chief Minister Mamata Banerjee said that she was feeling isolated after the defeat of Samajwadi Party in UP and death of former Tamil Nadu chief minister and AIADMK chief J Jayalalithaa. She also stressed that the issue of demonetisation should be taken forward and the problems and casualties faced by the public should be focused on. She spoke about the issues of Saharanpur and Kashmir and suggested that opposition should jointly visit these places. National Conference leader Omar Abdullah supported this.

A few other issues were also raised in the meeting. All India United Democratic Front leader Badruddin Ajmal brought up the issue of names being deleted from electoral rolls in Assam. Some leaders present at the meeting said that opposition needed to build an image of unity, though it will take time but, unity can be seen in the very near future.