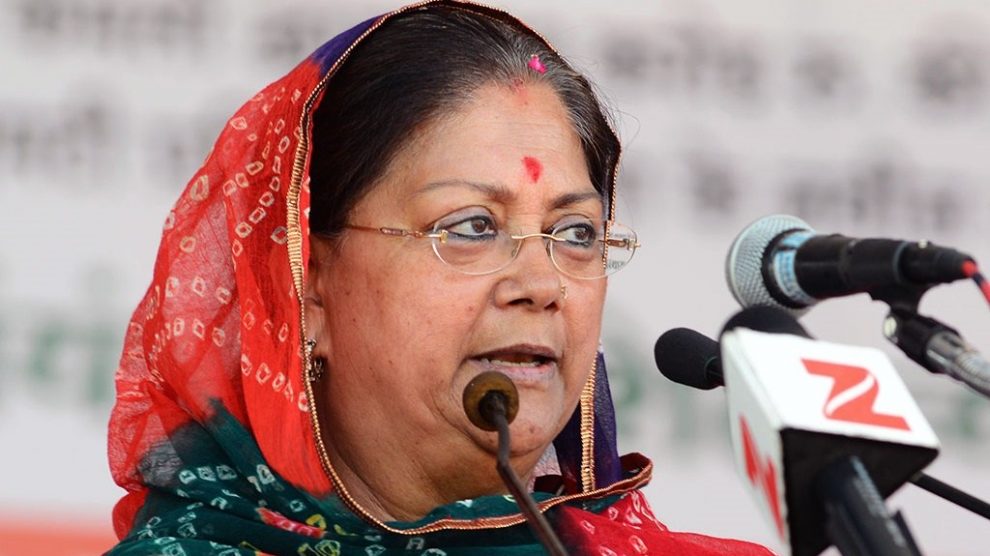 The Chief Minister of Rajasthan, Vasundhara Raje begins her 58 day Yatra today, covering 6000 kilometres, spread over 165 constituent assemblies of the state that will go to the polls later this year.

The Yatra will be undertaken in ‘Vijay Rath’ – a customised bus, and will be flagged off by BJP President Amit Shah at Kankroli village in Rajsamand District. The ‘Rajasthan Gaurav Yatra’ is expected to end on September 30th in the temple town of Pushkar.

Rajasthan Home Minister Gulab Chand Kataria and MLA Ashok Parnami are said to accompany the Chief Minister, and they will be on the road with her for 40 of the 58 days.

Prayers will be offered by the CM at the Charbhuja temple in Rajmasand on Saturday morning, before traveling a distance of 25 kilometres to Kankroli village on a helicopter for a public meeting, before commencing the Yatra.

Raje will address 135 public meeting and events to welcome her will take place at 500 venues, during the Yatra. Raje has been named as the Chief Ministerial candidate for the upcoming assembly elections by the Bharatiya Janata Party, and they claimed that they will win 180 out of 200 seats.

The Congress reacted to this Yatra by accusing the BJP of wasting taxpayers’ money, stating that the pre-poll tour was an attempt to mislead the people of the state. Congress General Secretary Ashok Gehlot stated, “Raje is trying to hide her failures in the name of the Yatra. This will not be a ‘Gaurav Yatra’ but a ‘Vidai Yatra’ of her government.”

“She has no remarkable achievement in any area, then which pride is being talked about?”, Gehlot asked. According to him, Raje took out the ‘Suraj Yatra’ (Good governance) ahead of the last assembly elections but that her her government had developed ‘Kuraj’ or ‘bad governance’.

Gehlot then asked Raje to clarify whether this initiative was an initiative by the central government or the state government, saying that there would be no impact of any BJP exercise. He also stated that the people would vote out the party because all sections of the society including farmers, workers, tribal people, minorities, women and youth; all resented the BJP governance.