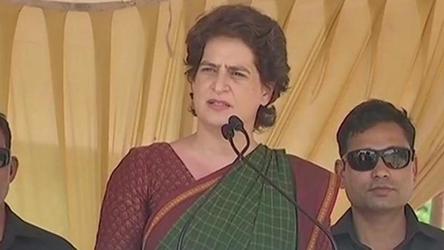 Priyanka Gandhi Vadra addressed a rally in Wayanad today saying mentioning how the Congress party as against BJP will render its promises to the people.

‘Your future is safe in his hands,” says Priyanka Gandhi Vadra, referring to Rhul in her rally in Wayanad.

“I am here standing as sister. I am here for my brother. For last ten years he is working hard. he has been personally targeted. We have suffered a lot. I was 12 when my grandmother was assassinated. Seven years later my father was killed. Our family of four was deeply affected. “Five years ago a government came into power that was voted in with a big majority. In all their wisdom, people of our country placed their faith and hope in the BJP government. That government from the moment it came to power began to betray that faith.

Asserting that Rahul Gandhi does not have ill feelings for anyone, she says, “He took courage to go to other side and hugged the man behind the campaign against his family. My mother was insulted, my father’s martyrdom questioned.”