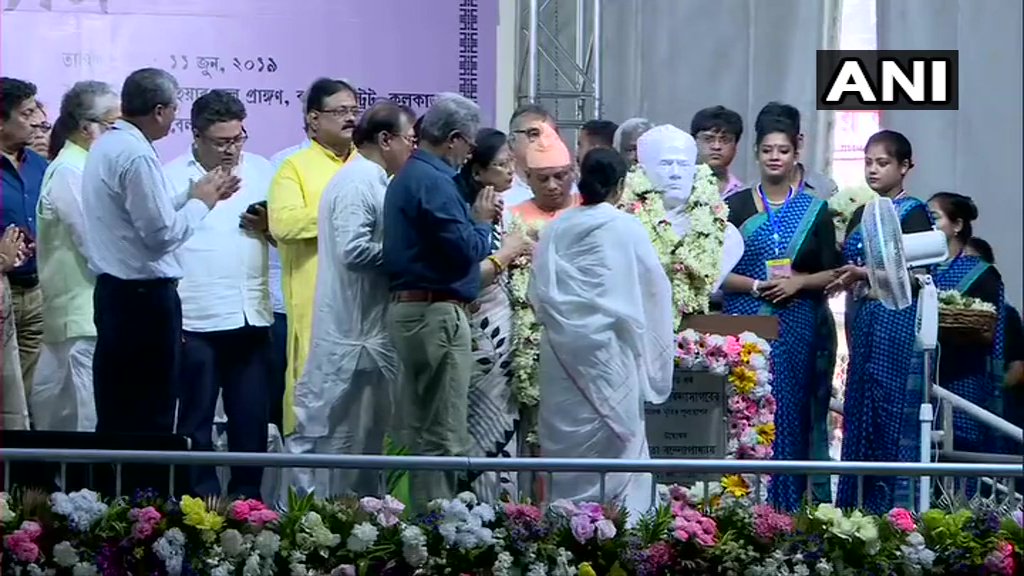 Kolkata: West Bengal CM Mamata Banerjee garlands the bust of Ishwar Chandra Vidyasagar at a ceremonial programme at the Hare School ground in College Street. Later in the day the bust will be re-installed at Vidyasagar College. pic.twitter.com/pSYLK2vHLP

Later in the day, the bust will be re-installed at Vidyasagar College where it was installed before it got vandalized during a political clash between Trinamool Congress (TMC) and Bharatiya Janata Party (BJP) workers on May 14.

West Bengal Chief Minister Mamata Banerjee will later march to Vidyasagar college where the statue will be re-installed.

The events at – Hare School ground and Vidyasagar College – are organized by the state’s Higher Education and School Education Department in collaboration with the committee for the 200th birth anniversary of Vidyasagar.

The bust of Vidyasagar was vandalized during a violent clash broke out between the members of Trinamool Congress students’ Union and Bharatiya Janata Party (BJP) supporters who participated in BJP Chief Amit Shah’s massive roadshow in north Kolkata on May 14.

Soon after the incident, Prime Minister Narendra Modi while addressing a poll rally on Mya 16 promised to build a grand statue at the same place where the old stood before being vandalized in a violent clash.

However, West Bengal Chief Minister publically denied the offer stating that her state has got enough money to make the structure. Banerjee also accused BJP of vandalizing the Statue during Amit Shah’s mega roadshow in Kolkata on May 14.

Ishwar Chandra Vidyasagar is often remembered for his contribution in introducing concepts of widow-remarriage in the traditional society before independence. Vidyasagar, a philosopher, writer, reformer, printer, and philanthropist was the one who spearheaded the most influential campaigns for widow-remarriage.

Both – Bharatiya Janata Party and Trinamool Congress- is currently in loggerheads after a clash between two political groupings occurred after the removal of BJP’s flag on Saturday. BJP leader Mukul Roy has alleged that four BJP workers were shot dead by the members of TMC. While TMC has said that its party workers are also killed in the clash between the two factions.