The Indian Wire » Politics » What Should Lalu Yadav save, his son or his political career? 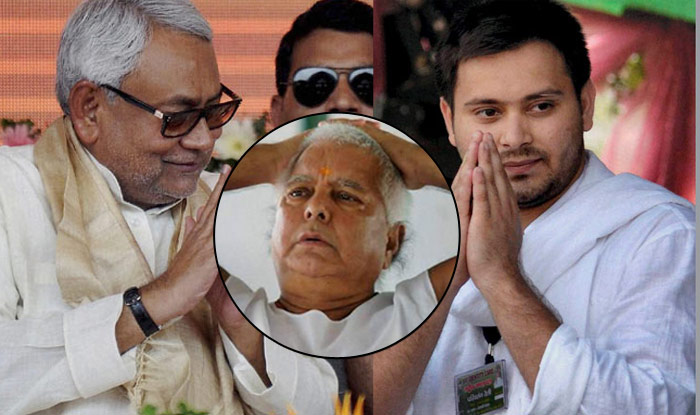 With the growing pressure on Tejashwi Yadav to resign, Lalu Prasad Yadav is in the dilemma whether to save the future of his son or RJD.

Former Railway Minister and RJD chief Lalu Prasad Yadav has lately become the favorite of the CBI and IT department, with both of them now frequently paying a visit to him and his family member’s residence. Lalu has been charged with quite a few cases by the CBI and now even his daughter Misa Bharti and son Tejashwi Yadav are on top of the list of the agency.

A few months back, Income tax authorities had issued summons to Misa Bharti and her husband Shailesh Kumar in connection with alleged Rs 1,000-crore benami property deals. Multiple raids and searches were conducted on premises and offices of about two dozen entities connected to benami property deal case and had seized documents and computer hardware.

Recently, a fresh string of raids were conducted on the premises of Lalu and his family members on July 7.  A new case was registered by the CBI, regarding the irregularities in sanctioning the tender for maintenance of hotels. The FIR lists irregularities in the tender for development, maintenance and operation of BNR Hotels in Ranchi and Puri, sanctioned to the private Sujata Hotels in 2006. Lalu along with few of his family members are charged in this case, Bihar Deputy Chief Minister Tejashwi Yadav is also accused in this case.

Following the allegation on Tejashwi Yadav and him being attached to the CBI case, BJP has been demanding the resignation of Tejashwi. These raids have created a ruckus in the political parties, especially in Bihar government. Both the ruling and opposition parties are targeting each other behind the disguise of these raids.

Many opposition parties are of the opinion that BJP-led NDA is deliberately targeting the opposition parties by conducting these raids. Few parties are saying that it is a political vendetta being played against Lalu and his family and few are saying that BJP has asked to carry out these raids on Lalu so that he is occupied in the proceedings of the case and is diverted from the Mega Rally Lalu plans to execute against BJP on 28 Aug.

All India Congress Committee spokesperson Manish Tiwari alleged at a news conference that the NDA government was nervous about various opposition parties coming together on an anti-BJP platform and hence carrying out these raids on various opposition leaders. A senior RJD leader Shivanand Tiwari is also of the opinion that these raids might become the reason for the possible break in the alliance of Bihar, that includes JD(U)-RJD and Congress. AICC spokesperson Abhishek Singhvi also said in context with raids and searches conducted on Lalu Prasad Yadav and his daughter, that the government is being ‘selective and opportunistic’.

While on the other hand trying to defend the allegation BJP-led NDA government said that the government was not playing any political vendetta and it was only performing its duties. The raids are not conducted just on mere decisions. The department carries out searches only if they have a  substantial basis and a reason to suspect that a crime has been committed.

The major effect of these raids can be seen on the mahagathbandhan. Taking a note on the recent actions of Bihar Chief Minister Nitish Kumar, questions are being raised whether the alliance will survive or not? Nitish Kumar’s first noticeable move against the opposition was seen when he extended his support to Prime Minister Narendra Modi’s announcement of demonetisation. His motives again became suspicious when he ditched the opposition by supporting the NDA Presidential candidate Ram Nath Kovind. Again all eyebrows were raised against him when he attended the midnight launch of GST on 30 June. All these events showed that Nitish Kumar will break his alliance with RJD and Congress and again join back with BJP. Though both RJD and JD(U) has ensured that the alliance will be intact, the possibilities of a break up still remain in the air.

Almost all the opposition parties backed and extended their support to Lalu after the recent raids except Nitish. JD(U) Chief preferred to remain quiet and maintain his ‘Mr. Clean’ reputation. Nitish said that his clean image in the politics was the very base of his career and he will protect and withhold this principle throughout his life at any cost.

Responding to BJP’s demand of Tejashwi’s resignation Lalu said that there is no question of Tejashwi resigning from the post. Others backing Lalu also said that till now there is only allegation charged against Tejashwi of him being connected with the case, the CBI has not even filed a charge sheet against him. Nothing has been proven yet and he has not been declared a criminal yet so nobody has any right to ask him to resign. The opposition parties also attacked BJP saying that if Tejashwi had to resign for his connection with CBI case, why has nobody asked for the resignation on Uma Bharti. They also attacked Modi saying that even Modi’s cabinet ministers were not spotless during his rule as the CM of Gujarat.

Reciprocating the views and opinions of all the parties, Tejashwi Yadav commented that he was just 14 and did not even have a mustache when this irregularity in sanctioning the order took place on the basis of which he was being charged by the CBI to be connected with the case.

In a recent meeting held in Patna, Bihar chief minister and JD (U) national president Nitish Kumar had given time to his ally Rashtriya Janata Dal (RJD) to reconsider its stand on the resignation of deputy chief minister Tejaswi Prasad Yadav.

Looking at the current political situation in the state, the ball is in the court of Nitish Kumar, RJD is more in need of JD(U) than the later in need of  RJD. JDU is very well aware that it cannot form a government in Bihar without making an alliance with any other major party, but it is now up to JD(U) to decide whether it wants to continue with RJD and Congress or it wants to go back to BJP. As BJP and CBI raids are increasing the pressure on Lalu, and if the law announces its decision against Lalu and if RJD pulls out from the alliance, it is likely Nitish might win the elections as BJP is ready to extend support to his government.

If by any chance JD(U) joins hands with BJP and forms an alliance and emerge as the ruling party in Bihar, the total washout of RJD from politics is certain. Now the question that arises is what decision Nitish and Lalu will take and what will be its effect on the Bihar government and political parties.

If JD(U) breaks its alliance with RJD, it will almost be impossible for RJD to establish itself in Bihar again. If RJD chief Lalu stays firm on his decision of Tejashwi not resigning than he might have to face differences with Nitish Kumar as the CM is also demanding for Tejashwi to step down. On the other hand, if he bows down to accept the demand of BJP and Nitish than he might end up putting a full stop to his son’s political career.

Now the sword is hanging over the head of RJD Chief Lalu Prasad Yadav, whether to save RJD’s future or his son’s future. All the eyes are on him, as many have crossed its fingers that Lalu might not take any such decision that might hamper the political career of other parties and result in him digging his own grave.

However, a heavyweight politician like Lalu is unlikely to take such impulsive decision to back out from the mahagathbandhan and end his political career but the consequences of any decisions in politics are very skeptical.