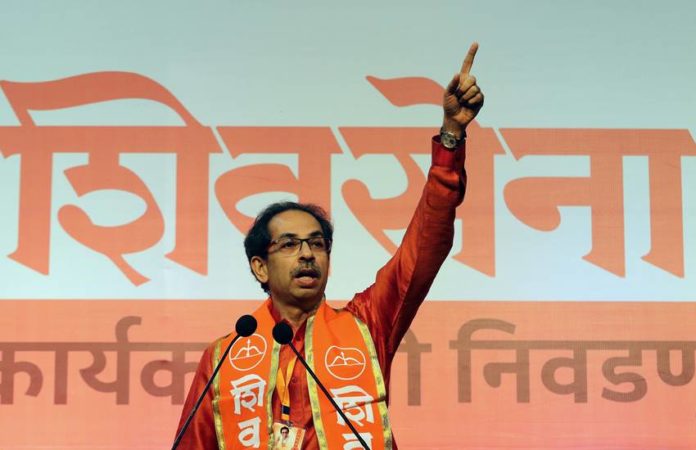 Bharatiya Janata Party (BJP) Maharashtra ally, Shiv Sena on Tuesday again pitched for the construction of Ram Mandir in Ayodhya. Sena in its mouthpiece ‘Saamna’ said that with over 350 MPs in Lok Sabha, the BJP-led Central Government should now take a step towards constructing the Ram Mandir.

It comes days after Shiv Sena Chief Uddhav Thackeray along with his son Aditya Thackeray and all 18 MPs visited the makeshift shrine of Ram Lalla on June 16.

The Uddhav Thackeray-led Shiv Sena in its editorial ‘Saamna’ stated that ‘Uttar Pradesh Deputy Chief Minister Keshav Prasad Maurya had visited Ayodhya a day before us.

He had said in Ayodhya that ‘Ram Mandir can be constructed by two ways, one by holding discussions with Muslim while other is through the Supreme Court‘, if both things will fail, Ram Mandir will be constructed through an ordinance.

Saamna further asserted that the verdict of the recently held national polls is against those who were opposing the construction of Ram Mandir. The Editorial in party mouthpiece further claimed that all the options and alternatives have failed, the central government has over 350 MPs and the massive mandate is for the Ram Mandir.

Saamna further added that the central government should now go ahead in the directions of constructing a Ram Mandir.

‘BJP has 303 MPs. Shiv Sena’s 18 MPs. What else do you need to construct a Ram temple?’, Raut said in a tweet on Saturday. ‘We have got the blessing of fulfilling the promise made to the people and Lord Rama and we have to complete their work first’, Sanjay Raut said in another tweet on June 6.

Thackeray has last year visited Ayodhya and asked the Central Government to announce a date for the construction of the Ram Mandir.

During his visit to Ayodhya, Uddhav Thackeray “seek an answer” from BJP as to how many more elections will people be fooled with the slogan. He had also questioned Prime Minister Narendra Modi on the issue of construction of Ram Mandir on the disputed site.

The Shiv Sena had last year demanded an ordinance for the construction of a Ram Mandir and claimed that it has the support of more than 400 MPs cutting across party lines.