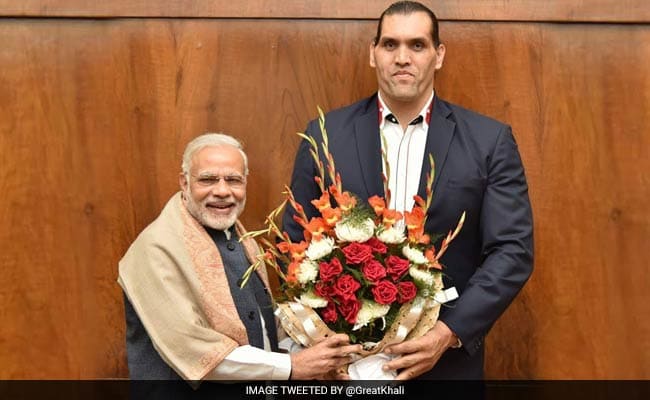 With political parties at their heights of having celebrities in the campaign for the ongoing Lok Sabha elections, WWE superstar and wrestler Dalip Singh Rana, popularly known as the Great Khali among his followers all over the world will be campaigning for his friend Anupam Hazra. Anupam Hazra the Bharatiya Janata Party (BJP) candidate will file his nomination tomorrow for Jadavpur constituency in Kolkata for the Lok Sabha elections.

The campaign for the Jadavpur will be more enticing when the Great Khali, a worldly known celebrity will be a part of the rally that will take place at 11 am tomorrow in the Jadavpur constituency.

Anupam Hazra joined BJP in the presence of Kailash Vijayvargiya after leaving Trinamool Congress (TMC). He will contest against the TMC candidate Mimi Chakraborty, a popular, well known Bengali actor. Nandini Mukherjee is the candidate fielded by the Communist Party of India Marxist (CPIM).

Madhya Pradesh chief minister Shivraj Singh Chouhan met The Great Khali in 2017. the controversies then ripened up of Khali joining the Bharatiya Janata Party (BJP) but he denied having any such political plans. However, he also said that his decision might change as the “weather keeps changing from morning till evening.”

Anupam Hazra was the youngest MPs turncoats. Hazra once very close to TMC Supremo Mamata Banerjee represents Bolpur Parliamentary Seat. He was expelled by the party for his inclination to leave the party.