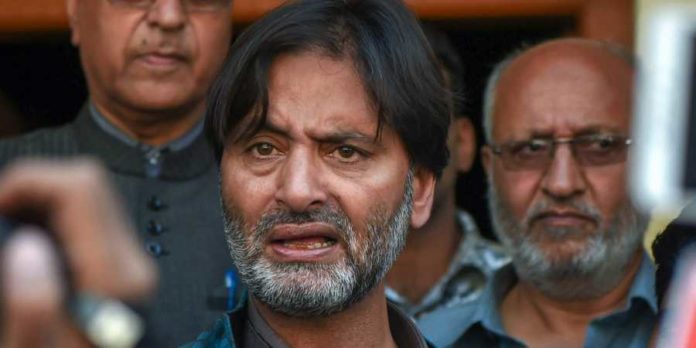 Jammu and Kashmir Police on Friday late night detained Separatist Leader and Jammu Kashmir Liberation Front (JKLF) Chief Yaseen Malik along with dozens of Political Activists and Leaders from Jamat-e-Islami in several parts of the valley ahead of a crucial hearing in the Supreme Court on Article 35A, expected on Monday.

Malik who was detained from his Maisuma Residence reportedly has been taken to Kothibagh Police Station. He is a part of Joint Resistance Leadership in Jammu and Kashmir alongside Syed Ali Shah Geelani and Mirwaiz Umar Farooq.

While across the valley, Police and Paramilitary Forces have been put on High Alert. The Centre Friday ordered the deployment of 100 additional companies of paramilitary forces to Jammu and Kashmir.

A spokesperson of the Jamat-e-Islami, meanwhile, confirmed that their leaders, including the party chief Hamid Fayaz, was detained during a massive crackdown launched by authorities against the group. Fayaz said, ‘police and other forces agencies launched mass arrest drive and raided many houses in the Valley wherein dozens of its central and district level leaders have been arrested’

He further called it a well-planned conspiracy to pave way for further uncertainty in the region.

Former Jammu and Kashmir Chief Minister Mehbooba Mufti called arbitrary move. Mufti said in a tweet, ‘In the past 24 hours, Hurriyat leaders & workers of Jamaat organization have been arrested. Fail to understand such an arbitrary move which will only precipitate matters in J&K. Under what legal grounds are their arrests justified? You can imprison a person but not his ideas.’

In the past 24 hours, Hurriyat leaders & workers of Jamaat organisation have been arrested. Fail to understand such an arbitrary move which will only precipitate matters in J&K. Under what legal grounds are their arrests justified? You can imprison a person but not his ideas.

Yasin Malik’s detention came days after the authorities on Wednesday removed security covers of 18 more Hurriyat Leaders and others 155 Politicians in the aftermath of Pulwama Terror Attack.

As per the Home Department of the state, providing security to these Hurriyat Leaders is a waste of scarce resources which could be better utilize anywhere else.

Development about revoking security came in the aftermath of Pulwama Terror Attack on February 14 that claimed lives of 40 CRPF Personnel.