The Indian Wire » Politics » BS Yeddyurappa, others get bail in Complaint filed in Connection to Karnataka ‘Audio Clip’ Row 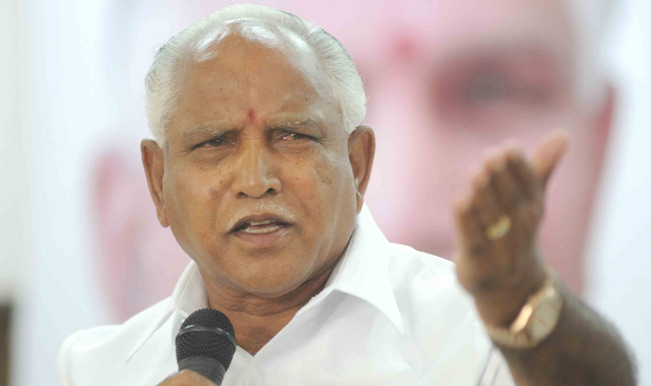 Karnataka BJP President BS Yeddyurappa, Preetham Gowda, Shivanna Gowda, and Marakal on Saturday got bail in the case registered by Sharanagouda, son of Gurmitkal MLA Naganagouda Kandkur, over an alleged call made to him by Yeddyurappa.

The bail granted by City Civil Special Court also asked all the four to pay Rs 1 lakh each as bond. The complaint was filed at Devadurga police station under Section 506 of IPC (Punishment for criminal intimidation).

Karnataka: BS Yeddyurappa, Preetham Gowda, Shivanna Gowda & Marakal gets bail in the case registered by Sharanagouda, son of Gurmitkal MLA Naganagouda Kandkur, over alleged call made to him by Yeddyurappa. FIR lodged under section 506 of IPC (Punishment for criminal intimidation)

Sharanagouda had on Wednesday earlier this week filed a police complaint against the BJP leaders over an alleged audiotape released by Karnataka Chief Minister HD Kumaraswamy making allegations of toppling the JD(S)–Congress Coalition Government.

This comes after the Karnataka Assembly on February 14 witnessed uproar as BJP legislators walked up to the Well of the House in protest against the formation of SIT into the audio tape matter.

Yeddyurappa said: “We demand a house committee to probe into the matter. We will not get any justice through SIT investigation as it will be under the Chief Minister. I am going to discuss in detail with the Speaker.”

Chief Minister HD Kumaraswamy on February 11 announced to form a Special Investigation Team (SIT) to investigate and probe to “bring out the truth”. Assembly Speaker ordered to complete the probe within 15 days.

HD Kumaraswamy made the announcement in the state assembly after Speaker Ramesh Kumar suggested a special investigation team probe the episode to “establish the truth” as his name has also been dragged into the row.

However, BS Yeddyurappa had earlier said he would retire from politics “if it (the allegation) is proved. If I had spoken like this (about the speaker), if it is proved, I will resign as an MLA and quit politics,” he had said.

However taking a quick U-turn on Sunday, while Speaking to reporters, BS Yeddyurappa has admitted that it is his voice on an audio clip released by Chief Minister HD Kumaraswamy as “proof” of the saffron party’s alleged attempts to topple the Congress-JDS coalition in Karnataka.

He (Sharangouda) recorded the conversation and the audio clip was chopped according to the convenience, leaving out a major portion. HD Kumaraswamy as a part of conspiracy sent Sharangouda to the inspection bungalow,” said the former CM