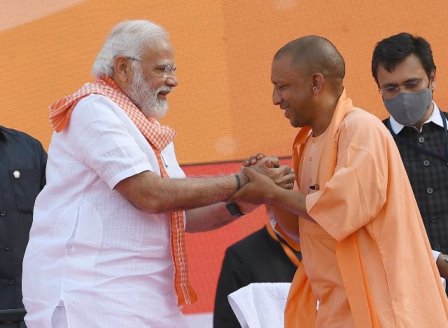 Yogi Adityanath took oath as the Chief Minister of Uttar Pradesh on Friday at the Atal Bihari Vajpayee Ekana International Cricket Stadium for the second term. Along with two deputy chief ministers and 50 ministers. Of these, 22 ministers belong to the tenure of his first government. Governor Anandiben Patel administered the oath of office and secrecy to Adityanath.

After the swearing-in ceremony, the first meeting of the Yogi Adityanath cabinet was held at seven in the evening.

The Bharatiya Janata Party, which returned to power with a big majority in the 2022 Uttar Pradesh assembly elections.The party has re-elected Yogi Adityanath the leader of the legislature party.

PM Narendra Modi has said that this should be the future cabinet of UP, which can work for the next 15 years. In view of these things, Aseem Arun, who left the job of IPS and contested the elections, has been made a minister. Apart from this, Arvind Kumar Sharma has also got a chance. Arvind, a close aide of PM Modi, left the job of IAS and became active in UP politics. He is currently the state vice-president of BJP.

With dignitaries including Prime Minister Narendra Modi, Union Home Minister Amit Shah and Defence Minister Rajnath Singh and others attending the swearing-in ceremony. CCTVs and drones were deployed to manage crowds, while 7,000 personnel of the civil police and the Provincial Armed Constabulary (PAC) as well as members of the Anti-Terrorist Squad (ATS) were manning the venue.