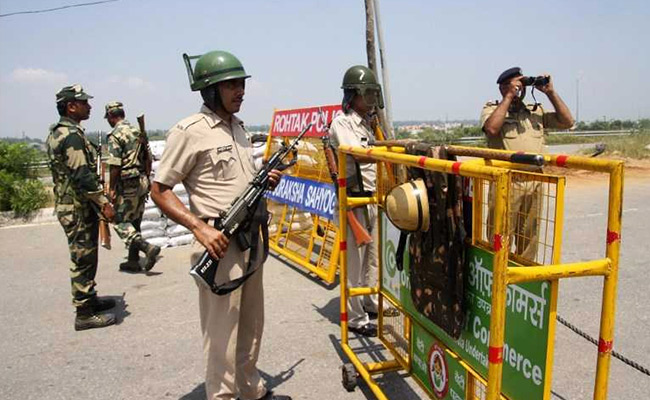 The controversial self-styled Godman Gurmeet Ram Rahim was found guilty of sexually assaulting 2 Sadhvis, by the Panchkula District court on Friday and his sentence will be announced today by 2:30 pm.

Dera Sachha Sauda Chief Gurmeet Ram Rahim is recently the reason for high alerts in states of Punjab and Haryana. The hearing for a case lodged by a Sadhivi of his Ashram for raping her was held on Friday and he was convicted guilty. Following the announcement of the court’s decision lakhs of his followers who had gathered for the verdict immediately became violent and started attacking the media vans and burnt down government properties. The government though had gone an extra mile to ensure the maintenance of law and order, utterly failed.

Despite all the adjoining borders of Punjab and Harnaya sealed and all the entry and exit points under strict survilliance, lakhs of people managed to reach Sirsi and Panchkula, where the hearing was to be held. The state and central government had deployed 167 companies of paramilitary forces in the state. Among the 167 companies, 97 are CRPF companies out of which 4 are women CRPF companies. Along with these 16 RAF, 21 BSF, 12 ITBP and 37 SSB companies were deployed in Punjab and Haryana. The Center had sent 9700 CRPF personnel to Haryana to keep the system alert. About 64,000 personnel were deployed in Haryana, Punjab and Chandigarh. But in spite of the all these tight security arrangements riots broke out in many districts of Haryana especially in Panchkula and Sirsi.

But in spite of the all these tight security arrangements riots broke out in many districts of Haryana especially in Panchkula and Sirsi. Looking at the seriousness of the situation Ram Rahim was flown to Rohtak jail 70 km away from Delhi instead of Ambala jail where usually all convicts are taken.

On the grounds of drastically failing to handle the situation Haryana Chief Minister Manohar Lal Khattar was criticised extensively by the opposition and his resignation was also demanded. Responding to this the CM had assured that now the situation was under control and strict actions will be taken against all those guilty of spreading violence and disturbing the peace.

As per the latest updates on the case, a special court will be set up in inside the District Jail premises in Sunaria near Rohtak for the sentencing of Gurmeet Ram Rahim. Central Bureau of Investigation (CBI) special court judge Jagdeep Singh who had held the hearing on Friday will be flown to Rohtak today. The district jail premises, about 10 km from Rohtak town, has been completely sealed off by security forces, including paramilitary forces and Haryana Police while the Army has been kept on standby for emergency situations.

Haryana Director General of Police (DGP) B.S. Sandhu assured that the administration is fully prepared to face any type of situations. Anyone spotted violating the rules or forcefully trying to enter the sealed regions will be warned once and if still continues, will be shot on the spot Sandhu said.

The Dera Chief is convicted on two counts, for rape Section 376 IPC, criminal intimidation Section 506 IPC and Section 509 word, gesture or act intended to insult the modesty of a woman. The minimum imprisonment for a rape convict is seven years which can be extended for a life term sentence and the other sections have imprisonment for two and one years respectively. The final verdict will be announced by 2:30 pm on Monday.