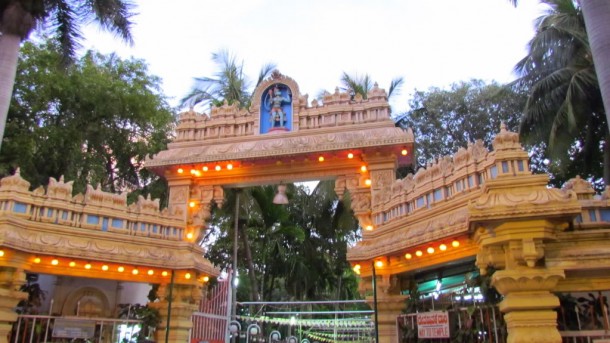 This post is about the famous Hanuman temple : Ragigudda Anjaneya temple.

Every temple upholds a legendary story, likewise the history of the Ragigudda Anjaneya Temple is as interesting as Hanuman Leelas. According to history, there was a huge heap of Ragi (a food grain) turned into a rock, therefore the name “Ragigudda”. When this incident happened, the Thrimurthies, Lord Brahma, Vishnu, Shiva visited the spot, wanted to reside here permanently modifying themselves into three huge stone pillars, even today you can see 32 feet tall monolithic blocks, which witnesses the existence of Thrimurthies in this temple.

The Lord Hanuman is very embodiment of bhakthi, “The Bhaktha Of Bhakthas”. His adoration of the incarnate divinity of Lord Rama is absolute, hence you can also find Shiva Linga, Rama, Sita, Lakshmana and Hanuman shrine in the same precinct. During Rathotsava temple Ratha, placing Hanuman shrine will be pulled by the devotees.

The authorities have built many pathways to regulate the huge crowds that come during festival times, hence temple has two gates. As you make your entry into the temple, you can see the scene and the sight of the temple which is amazing. Opposite to the main gate, there is a man-made waterfall called Hanuman Dhara which has helped put the temple on the tourist map of the city.

On entering, there are many shrines, to Ganapathi, Rajarajeshwari and the Navagrahas at the base of the hillock. Over the past decades, this temple has become the social center in this locality. The temple has a charitable arm, which takes up a lot of activities for social cause.

The temple has two halls – the smaller one that can be rented for performing small Hindu ceremonies like the thread ceremony, seemanthum, many otherr. And the bigger hall is used for major events like marriage. Daily morning and evening, Prasada is served to all the devotees and on every Saturday devotees are served with lunch. During  Hanumajjayanthi special poojas, abhisheka, homas are done for 12 days and is celebrated with great devotion and attracts thousands of devotees on these 12 days and Mahaprasada is served to all the devotees on all the 12 days.Overall the temple is well maintained with respect to cleanliness and taste of prasada. The timings of Darshana are from 8 am to 12 noon and 5 pm to 8.30 pm.

The best part of this temple is, you need not to worry about losing your footwears like in other temples, as soon you enter the gate you can find the little bags in which you have to put your footwear and which is then stored by the temple authorities while you take darshan. This is a free service and works very efficiently indeed.

The Ragigudda Prasanna Anjaneya Temple is a very popular Hanuman temple in South Bengaluru and is a lovely green spot.