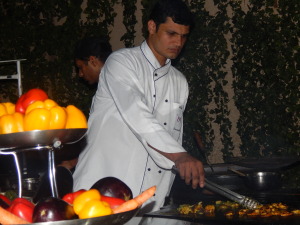 By the Blue @ Grand Mercure Koramangala offers full barbecue menu on Saturday Evening. Check inside for more details and images.

By the Blue, located inside Grand Mercure, Koramangala is yet another cool destination for people craving for Indian Cuisine. I happened to visit this on last Saturday and this poolside restaurant surely left me with some awesome time spent with a few friends.

The present weather in Bangalore is no less than heaven and if you get some nicely cooked barbecue dishes under the night sky, believe me, you can not ask for anything else. The same was my condition enjoying the barbecue special menu at By the Blue on this Saturday.

The first sight which I got after entering in the restaurant was of a great ambiance. Perfectly placed tables alongside the pool under the sky give a feeling of a true picnic party. The space has been pretty well utilized to keep things in place.

After reaching, we were welcomed by the staff and the booked table was allotted to us. It was great meeting the Executive Chef Mr. Vijay, who later briefed us about the dishes served. One of the first things which gets into mind after reaching a new restaurant is the service and the service in there was pretty good.

Being a barbecue cuisine, where most of the focus is on starters, I was surely expecting some yummy starters and the wait was not so long. Bharwan

Aloo (Potatoes stuffed with pomegranate and coriander) were one of the first dishes served to us and it came out to be really nice. Some of the other starters which were served included Sarson wali Broccoli (Another great stuff by the chef), Paneer Tikka, Kasundi Machi Tikka (Though I am not a fish fan, but surely couldn’t resist ordering it for 3 times), Lamb seekh kabab etc.

Well, I would surely love to try out that Bharwan Aloo and the Machi Tikka again if I get a chance, those 2 starters were my personal favorite from the evening and other friends of mine too praised the food. The only thing which felt short to make it even amazing was the number of starters offered. A few more starters, specially in the nonveg section would make the Saturday evenings more enjoyable for the people.

One of the eye catching things which I saw that day was the serving. To make it more creative, a few of the crazy things were used. Anyone would be surprised to see getting the food served from an old style iron box (Well, people stopped using them in households now and the people here are using in the restaurant). That was quite fascinating to see for sure.

So, the starters were all over and we spent a while roaming around and saw the place. As I

already said, By the Blue is an example of a great ambiance which attracts people. There is hell lot of space to accommodate a number of people and another great thing is that the restaurant open only at night except the Sunday brunch.

Alongside the starters, there were a few mock tails for us, as none of us drink, but by the end of the meal, 2 of them were convinced to try out some white wine after the assurance from me that it will not leave them high if they take it with some soft drink. Shirley Temple 2 and Virgin Mojito (my personal favorite) were again with a little By the Blue touch.

The starters as well as the mock tails were enough to fill the little tummies we had, but still, there is nothing bad to try out the main course which had some awesome offerings as well.

It started with Pizzas. Pork pizza and then the chicken pizza. With a thin crust and some extra toppings, it just added to the awesomeness of the evening. The final thing however was Dal (Dal Tadka and Dal Makhani) with Naan and Lachcha Paratha. Finally a couple of desserts ended that meal at By the Blue, but for sure, it was something refreshing right on a Saturday.

If you are planning for a chilled Saturday with barbecue, then By the Blue is a cool place to be at, provided you are in or around Koramangala. A meal for one with unlimited starters and 2 pints of bear costs Rs 999 + Taxes.