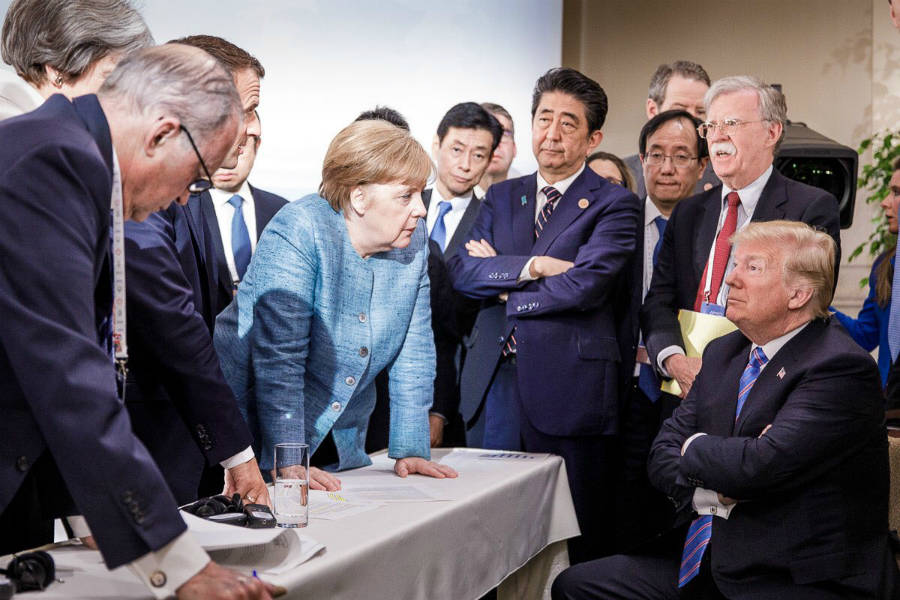 A picture of the US President Donald Trump and other G7 Summit country leaders recently went viral. The photo, taken during the G7 Summit last week in Canada was posted on the German Chancellor Angela Merkel‘s Instagram account. It showed President Trump sitting in a chair as other leaders including Chancellor Merkel and the French President Emmanuel Macron loomed over him, looking tense. Experts suggested that the tension between the leaders could be because of the fact that Donald Trump is just not ready to accept that the US needs to join in on the fight against Climate Change.

The US President faced a lot of flak when he pulled out of the Paris Climate Accord agreement last year. When reports of the recent plastic pollution and its horrifying effects on the on oceans recently came out, everyone wanted to strengthen its current stance on climate change even more. President Trump, who arrived late to the G7 Summit decided to completely avoid the Summit’s Commit to Climate Action programme.

Reports claimed that while the German Chancellor and President Macron showed their support to several policies to take action against climate change, the Trump representatives encouraged the use of fossil fuels. It is no secret that President Trump is not a firm believer of the fact that our planet is in danger. He has reportedly denied several times that climate change is happening. His unwillingness to indulge in proper talks about it and his trade policy debacle with Canada at the Summit do not bode well for America.

Alden Meyer, director of strategy of the Union of Concerned Scientists said, “President Trump’s wrecking ball approach to international diplomacy left him utterly isolated at the G7 Summit.” The Climate Control Programme this year focused on taking stronger steps to protect the world’s oceans, switching to market-based clean energy technologies and promoting innovation in the field of low-carbon energy systems. Since every member except America agreed on the climate control policies, international leaders and environmental activists all over the globe expressed their displeasure. Fred Krupp, President of the Environmental Defence Fund said, “America-until now-had led on climate. Today our president doesn’t even care enough to be present. We all must work to restore the USA to a leadership position.”