PSLV-C47 carrying CARTOSAT-3 is the first launch since Chandrayaan II mission and fifth launch this year.

The CARTOSAT-3 has an overall mass of over 1,600 kilogram. It is expected to address the increased users’ demands for large-scale urban planning, rural resource, and infrastructure development and coastal land use. 13 other commercial nano-satellites from the United States are also being carried as part of the commercial arrangement with NewSpace India Limited (NSIL), Department of Space.

Here are some interesting facts about the mission:

#1 CARTOSAT-3 is expected to capture images with a spatial resolution of 30 cm.

#2 PSLV-C47 will place CARTOSAT-3 into a 509km polar sun-synchronous orbit and 13 US nano satellites within 27 minutes after lift off.

#3 The mission life of CARTOSAT-3 would be for five years.

#4 India is expected to cross the milestone of launching 300 foreign satellites today. 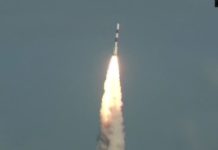