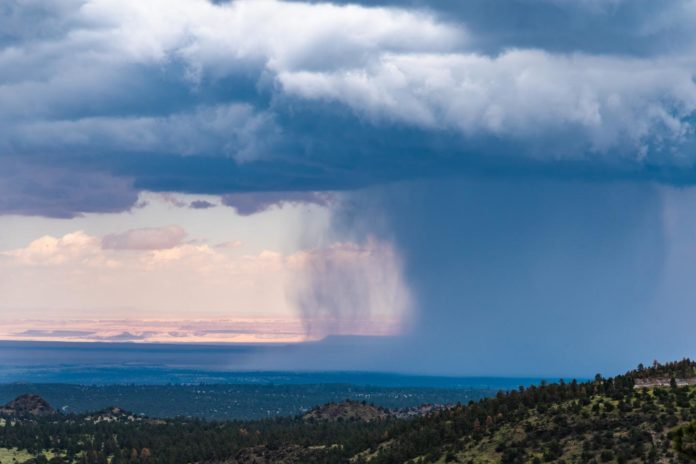 A team of researchers, led by the University of Arizona, examined traces of leaf waxes from land plants that had accumulated in deep sea sediments over the millennia, and reconstructed how the monsoon activity had been in the past in northern Mexico. The results of the study were published recently in the journal Nature Geoscience.

The study will help settle a long-standing discussion over whether or not monsoon activity stopped completely because of the cooling brought about by the ice sheets that had covered much of North America, or was it only suppressed.

During the Last Glacial Maximum, which was about 20,000 years ago, when mammoths and other prehistoric beasts roamed around on what is now known as northern Mexico and the southwestern United States, summer rains were responsible for a 35 percent of the annual rainfall, compared to with nearly 70 percent today, according to the research team.

The summer monsoon brings is important because it relieves from long intense summer heat and drought to the parched lands of the American Southwest and northwestern Mexico by diverting moisture from the tropics. If the region relied on winter rains alone, the Sonoran Desert would not be the world’s most biodiverse deserts.

“The monsoon is such an iconic feature of the desert Southwest, but we know very little about how it has changed over thousands and millions of years,” said Tripti Bhattacharya, who is the study’s first author. “Our finding that the Southwestern monsoon was suppressed, but not completely gone under glacial conditions, points to the dramatic variability of the atmospheric circulation at the time, but suggests it has been a persistent feature of our regional climate.”

The research team used a clever method that had never been used before to study the history of the monsoon, and discovered sort of an unopened book of past climate records, whereas most previously studied climate archives, in comparison are more like single, scattered pages.

The seafloor of the oxygen-poor zones in the Gulf of California contains organic material that was blown into the water for many thousands of years, which also includes debris from land plants that were growing in the region. Because the deposits are largely undisturbed due to scavengers or microbial activity, Tierney and her team were able to separate leaf wax compounds from the seafloor mud.

Co-author Jessica Tierney, who is an associate professor in the University of Arizona’s Department of Geosciences and Bhattacharya’s former postdoctoral adviser, has developed the analysis of the waxy coatings of plant leaves to remodel rainfall or dry spells in the past on the basis of their chemical fingerprint, particularly different ratios of hydrogen atoms. Tierney says that the water in the monsoon rain consists of a larger proportion of a hydrogen isotope known as deuterium, which is also known as “heavy water,” which is after its origin in the tropics, while winter rains contain water with a smaller ratio of deuterium versus “regular” hydrogen.

“Plants take up whichever water they get, and because the two seasons have different ratios of hydrogen isotopes, we can relate the isotope ratios in the preserved leaf waxes to the amount of monsoon rain across the Gulf of California region,” explained Tierney.

Combining together the past patterns of the monsoon in the Southwest can help scientists to predict future scenarios under the influence of a climate that’s making the globe warmer and warmer, and not another ice age, according to the researchers.

“The past is not a perfect analog, but it acts as a natural experiment that helps us test how well we understand the variability of regional climate,” added Bhattacharya. “If we understand how regional climates responded in the past, it gives us a much better shot at predicting how they will respond to climate change in the future.”