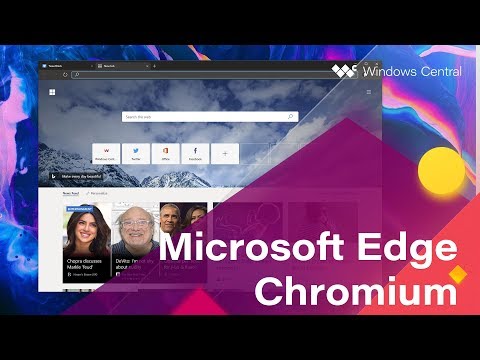 Microsoft continues to rebuild its Edge Browser to run with Chromium thus making it the first Microsoft Edge Chromium based browser for Windows. According to ‘The Verge’ ,they have secured an exclusive first look at the early work thanks to an anonymous source. The leaked screenshots makes Edge look similar to Chrome but will be adding its own technologies and animations to make it look more like a Windows browser however Edge will be using the same open-source rendering engine that is found in Google Chrome’s browser. Microsft core features to be retained in the browser includes launching a news feed powered by Bing search engine but the users can personalise the News Feed content. Microsoft hasn’t implemented its set aside tabs feature just yet, and write on the web with a stylus isn’t available. A dark mode is only available via a testing flag right now. Microsoft will also be providing a support for extensions and a dedicated extensions page for the ones it has approved. Chrome extensions can also be installed from Google’s online store. As Windows dominates the desktop/laptop OS market and if Edge performs and offers the same features as Chrome, including full access to Chrome’s extensions, many users may just use Edge instead. This could offer more control to Microsoft who may be able to influence how the browser is developed and what new web standards are pushed.

Microsoft Edge built on Chromium looks pretty impressive for an early version and is fast to launch and browse with. By keeping the Edge optimized in the future there seems to be no reason of using Chrome in Windows all thanks to Chromium backend.

No fixed date has still been announced as to when this browser will be available publicly but it’s likely to arrive very soon. We will keep you updated on all the recent news concerning the official launch of the Microsoft Edge browser.