A staggering $2.9 Billion contract to build a spacecraft carrying Astronauts to the moon as early as 2024, has been awarded by the National Aeronautics and Space Administration (NASA) recently.

This contract is part of NASA’s Artemis programme, that aims to return astronauts to the moon by 2024 as a stepping stone to the first human mission to Mars.

It has been awarded to SpaceX owned by billionaire Elon Musk, over Blue Origin owned by Jeff Bezos, and defence contractor Dynetics Inc. along with several traditional aerospace companies: Lockheed Martin, Northrop Grumman and Draper.

These other companies would however, be able to bid for future moon landing missions.

SpaceX collaboration with NASA: A brief history of time

SpaceX has made a decent history with NASA in spaceflights. It started with SpaceX COTS Demo flights. It was even awarded four additional crewed missions to the ISS in 2017.

The Crew Dragon Demo-2 mission, first time crewed vehicle launch from the U.S after 2011 was successfully made in may 2020. SpaceX and NASA have even worked together in Defence Programs. 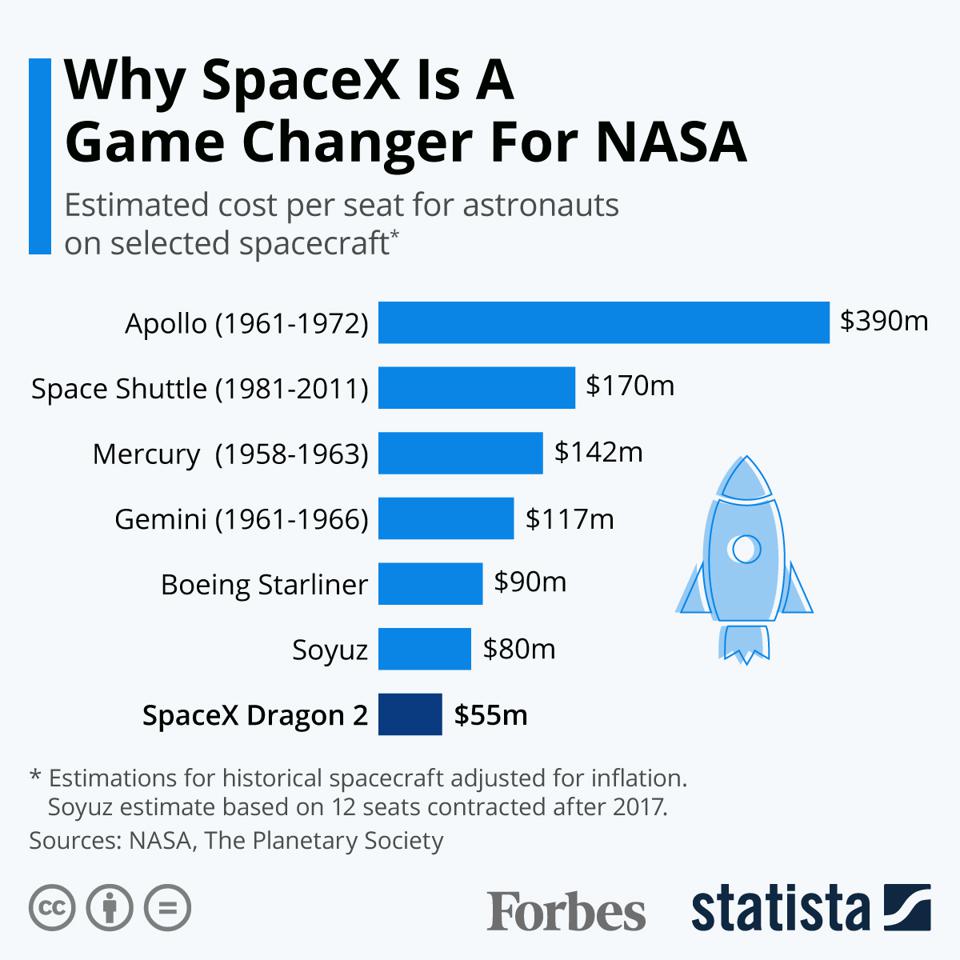 When NASA plans to achieve the landing of astronauts on the moon as part of its Artemis program, even promised by the Biden administration to include the first woman and the first person of colour there —are likely to be riding in a SpaceX vehicle.

Artemis has planned to launch its first uncrewed trip either later this year or early next year, using the Space Launch System, a powerful rocket for propelling the Orion capsule. It will be a trip to the moon and back for which the booster stage of rocket passed an important ground test last month.

That is SpaceX has become a high-profile partner of NASA.

Past Friday, NASA made the announcement for the use of Elon Musk’s Starship to take astronauts, cargo and robotic explorers from lunar orbit to the surface of the moon. The private space Enterprise is already developing a giant rocket called Starship in order to ferry people to Mars.

Numerous private satellite operators have relied on the company to carry their payloads to the orbit.

The award is only for the first crewed landing, and SpaceX must first perform an uncrewed landing. “NASA is requiring a test flight to fully check out all systems with a landing on the lunar surface prior to our formal demonstration mission,” said Program Manager at NASA.

Why the Starship is a better bet?

Every single launch of the Space Launch System for Artemis is expected to cost more than $1 billion each time. Starship serves the bigger purpose here as it is designed to be fully reusable making its cost to be far cheaper economically.

SpaceX has been attempting a series of high-altitude test launches of Starship prototypes at its site in Southern Texas, to drive perfection in returning the spacecraft to Earth. SpaceX has been able to make a great progress with the maneuver of belly-flopping to slow its fall, but the tests so far have all ended explosively.

Mr. Musk has publicly pledged that the spacecraft would be ready to fly people to space by 2023, although he has a track record of missing the schedules.

Why the proposed trip has been in limelight?

A Japanese billionaire, Yusaku Maezawa, has bought an around-the-moon flight on Starship to just pass by the moon and not land on it.

Blue Origin, the space company of Amazon Founder Jeffrey Bezos, has also staged a protest and fair criticism against NASA for awarding the contract to SpaceX.

In a 175-page protest, Blue Origin accuses NASA to have misjudged several parts of its proposal for lunar lander called Blue Moon, as reported by The Verge.

The Company proceeds on to say that this decision “eliminates opportunities for competition, significantly narrows the supply base, and not only delays, but also endangers America’s return to the Moon. Because of that, we’ve filed a protest with the Government Accountability Office(GAO)“.