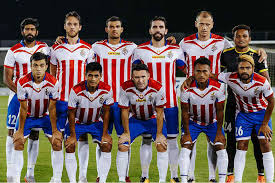 “I consider ATK to be the Manchester United of the ISL”, was what Chennaiyin coach John Gregory had to say before taking on the two-time ISL champs in their own backyard. And they emerged victorious with a 2-1 scoreline. That’s the story of ATK summed up this season. The Reds and Whites of Kolkata are out of sorts this season and a bulk of the blame goes to the Team Owners for changing a lot.

We’ve listed down some factors why ATK is in dismal form in ISL 4.

ATK aka Atletico de Kolkata, an Atletico Medrid project in the first 3 seasons, fell out with their Spanish roots and settled for an British setup instead. Having appointed former Manchester United striker Teddy Sheringham as Head Coach and Irish playmaker Robby Keane as marquee player, ATK lacked the flair and skill that had been an integral part of their game in the first few seasons.

ATK lost key players in the form of Borja Fernandez, Ian Hume and Mohammed Rafique to other competing clubs in the process of trying to settle for a setup favouring functional play. This resulted in a team with absolute newcomers and fresh faces who failed to live up to the expectations.

Irish superstar Robbie Keane was expected to shoulder the responsibilities of the team to a great extent, but his prolonged absence from the pitch owing to injuries meant that he was unavilable for the starting matches. Robin Singh started as ATK’s No.9 and couldn’t respond to Teddy Sheringham’s tactics. ATK lost the momentum early in the season and never really recovered.