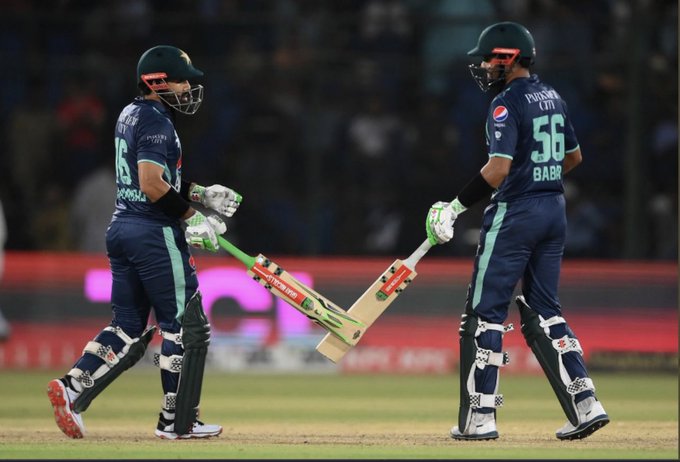 England and Pakistan will play seven T-20Is before the World Cup.

This series is more of a preparation for the World Cup.

Pakistan, after losing the final of the Asia Cup, is looking forward to fixing the things that went wrong.

England will be trying to set up their playing XI and test them ahead of the big tournament.

The first match was played on September 20.

Pakistan opened with their pair of Mohammad Rizwan and Babar Azam.

They both gave a great start to the team as they were able to achieve a total of 158/7.

England’s bowlers did a great job as they stopped the Pakistani batsmen at a low score.

The England team’s openers, Alex Hales and Phil Salt got off to a slow start, with Salt even losing his wicket.

Harry Brook’s knock of 42 runs made them win the match.

Luke Wood was the Player of the Match for 3/24.

The second match was played on September 23rd.

Phil Salt and Alex Hales opened for the England side.

They both gave a balanced start to the team and also added
runs to the board.

While Ben Duckett and Moeen Ali made the total big.

Moeen Ali’s fifty runs brought England to a total of 199 runs for the loss of five wickets.

Pakistan’s innings were opened by Babar Azam and Mohammad Rizwan.

It was important for Babar Azam to get back in form, as he hadn’t been able to score runs in a long time.

They both looked great together, and none of the English bowlers were able to take their wickets.

Both of them even completed their half-centuries and kept on going to achieve the total.

While achieving the total, Babar completed his century and marked his form.

They both single-handedly made Pakistan win the game.

They formed a partnership of 203 runs as Pakistan won the match by ten wickets.

Babar’s coming back in form is the best news for Pakistan fans.

At the end of the match, Babar was elected the Player of the Match for his century.

A record chase in Karachi 🤩