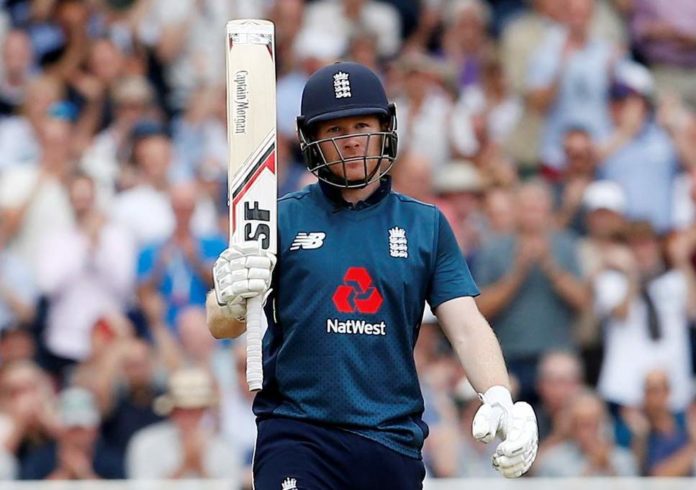 Manchester, June 18 (IANS) England and their captain Eoin Morgan re-wrote record books in a scintillating batting display to flatten Afghanistan by 150 runs in a World Cup clash here on Tuesday and to zoom to the top of the points table.

Morgan hit 17 sixes in his knock of 148 off 71 balls, the most in an ODI, as pre-tournament favourites England racked up the highest total of 397/6 in this World Cup so far, batting first.

For the rampaging hosts, who are now on eight points from five games, Jofra Archer (3/52) and Adil Rashid (3/66) returned the best figures.

But it was Morgan’s show as he smashed an eye-watering amount of maximums to surpass the record of 16 jointly-held by India’s Rohit Sharma, South Africa’s A.B. de Villiers and the West Indies’ Chris Gayle. Seven of those came off Rashid Khan, who had never given up more than two sixes in an ODI before, and Morgan brought up the record with a trademark straight drive that just reached the boundary rope.

Rashid ended with figures of 0/110 in 9 overs, making it the most expensive spell in World Cup history and the joint second most expensive figures in ODIs overall.

Morgan also notched up the fourth fastest hundred ever in a World Cup match. He went past 200 sixes in ODIs and raced away to his 13th ODI hundred and his first in a World Cup.

The team also finished with 25 sixes, the most by a team in an ODI innings, breaking the record registered by them in the game against West Indies in February this year.

Afghanistan bowlers were smashed to all corners of Old Trafford as Morgan hit four fours in his breathtaking knock. The 32-year-old’s century came off just 57 balls, thus making it the fastest in this edition of the tournament.

The total may have fallen three runs short of the fifth 400-plus total accrued at a World Cup but 397 was still England’s highest score in the history the tournament.

An embattled Afghanistan came into the game at the bottom of the table, having lost all four matches they have played thus far and their net run rate standing at -1.638.

As England began batting, Jonny Bairstow was accompanied by James Vince at the top of the order with Jason Roy sitting out with a hamstring tear.

The opening partnership was on 44 when Vince fell to Dawlat Zadran. However Joe Root came in and consolidated the innings with Bairstow. England’s second-wicket pair added 120 runs, but Bairstow missed out on a ton by 10 runs when he chipped a delivery straight back into the hands of Afghanistan captain Gulbadin Naib.

That was the last ball of the 30th over and the score was 164/2. But Afghanistan’s joy was short-lived as Morgan walked into the middle.

Taking strike, he didn’t take long to start decimating the Afghan bowling attack. Morgan took 35 balls to reach his first 50 but the transition to the second took just 22 deliveries.

Morgan’s partnership with Root ballooned to 189 off 102 deliveries before it was broken when the latter fell to Gulbadin in the 47th over.

The Afghanistan skipper also dismissed Morgan two balls later, but that was only after his opposite number had hit 19 runs off the over. The score was 359/4 at the time of Morgan’s dismissal and with Jos Buttler and Ben Stokes at the crease, there was little relief for Afghanistan.

Buttler, however, fell after making just two runs off as many balls, holing out at mid-off off a slower deliver from Zadran.

Rashid Khan, who had given away a whopping 96 runs for no wickets in the eight overs that he bowled, was brought in to bowl the 49th.

He conceded 14 runs in that over, thus taking his tally to 110. Zadran bowled the last over and dismissed Stokes off his first ball, but Moeen Ali then hit 19 runs off it, thus taking England within three runs of the 400-run mark.