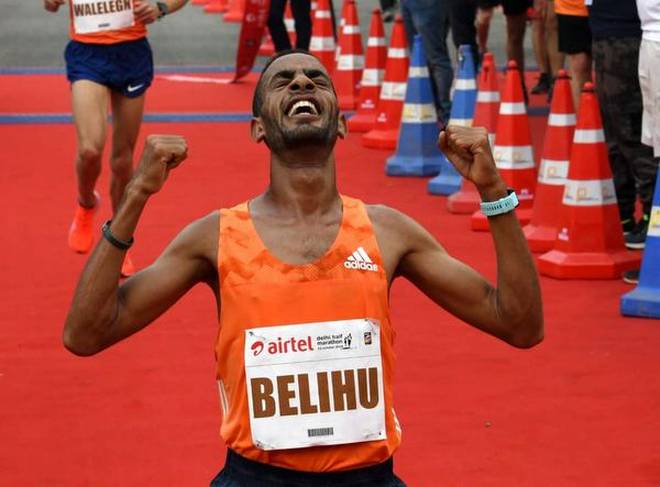 Bengaluru, May 19 (IANS) Ethiopian Andamlak Belihu and Kenya’s Agnes Tirop won the men’s and women’s titles in the TCS World 10K marathon run in this tech hub on Sunday.

Uganda’s Mande Bushendich crossed the finishing line in 28:03 minutes, followed by another Ethiopian Birhanu Legese in 28:23 minutes among the top 10 runners.

Belihu had won the Airtel Delhi Half Marathon (5km) race in November 2018.

Bushendich had also won 10km marathon in the Netherlands Parelloop race two months ago in March.

“I expected to run faster as there were so many good runners in the race,” said Belihu at the post-race presser at the venue -Kanteerva stadium in the city centre.

Bushendich said he was surprised none came with him when he made his move after halfway.

Legese, the Tokyo marathon winner early this year and Tata Steel Kolkata 25K winner in December, found the distance a little on the short side for his running ability to finish third.

Among the top 10 women runners, Tirop, who retained the title, clocked 33:55 minutes followed by Ethiopians Senbere Teferi and Letsenbet Gidey at the same time but behind the former in seconds.

“But Tirop was over 2 minutes slower than her course record run in the 2017 IAAF Word Championship’s 10,000 metres run in London where she was the bronze medallist,” said the organisers in a statement later.

“I would have liked to run faster and I did my best but no one else wanted to push hard so I was just content with the win,” said Tirop,

She also declared her ambition to return next year and bid for a hat trick of wins.

An estimated 25,000 runners poarticipated in 5 different races on the city’s main thoroughfares around the central business district and the famous Cubbon Park across the stadium.

In addition to elite runners, there was an Open 10K, Majja run (5km), Senior Citizens’ race and Champions with disability race (both 4km).

Organised by the Indian IT bellwether – Tata Consultancy Services (TCS) with sports management firm Procam International, the race is being held in the garden city since 2011 to promoteAa healthy and active lifestyle with a focus on a fit workforce.