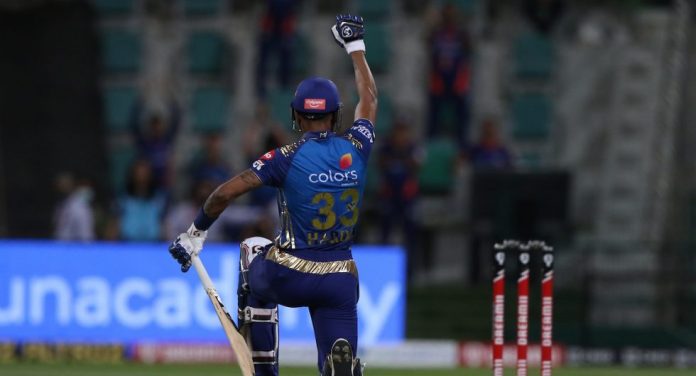 The star allrounder of the Mumbai Indians has done something that has not happened in the entire season. Hardik Pandya was seen taking a knee during the ongoing IPL to show his support the revolutionary moment on behalf of the Black Lives Matter. The gesture was seen during his knock against the Rajasthan Royals as the match was played in the Abu Dhabi.

On the other hand, the all-rounder was in the form of his life as he scored an unbeaten 60 runs from just 21 balls that he played. The knock took Mumbai to 195/5. Pandya did the gesture after hitting a massive six and reaching his half-century. It was Pollard first who responded to his gesture and raised his hand too.

Pandya also took the liberty to show his support on Twitter and posted the image with the caption #blacklivesmatter.

The Heroics of Pandya were not enough to lead the MI to victory as a century from Ben Stokes and a half-century from Samson made the way comfortable for RR and they won by 8 wickets.

Pollard had his say on the match and believed that Pandya was the one who brought them in the game but the Royals batted really well. Disappointed that they could not get enough wickets but if someone wins someone has to lose.

The Defending Champions play next to the Royal Challengers Bangalore in a thrilling encounter on Wednesday.