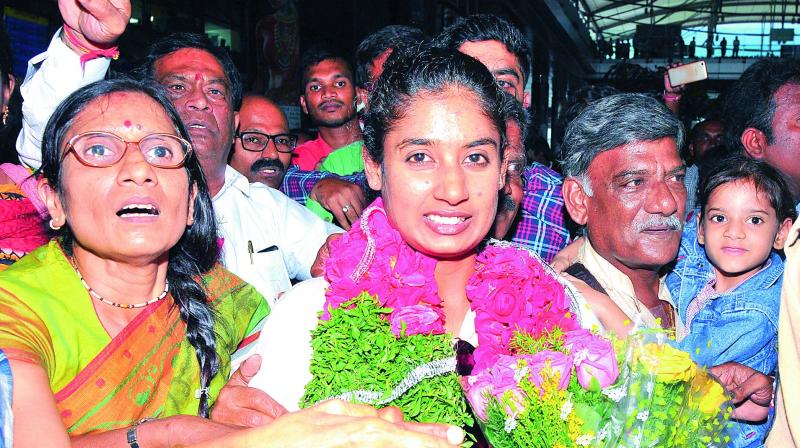 Mithali Raj on Friday arrived at Rajiv Gandhi International Airport where she was welcomed by a huge crowd.

After guiding the Indian women’s cricket team to the final of ICC World Cup 2017, Mithali Raj came home on Friday. She received a warm welcome at her hometown as people turned up in large numbers to meet the Indian skipper. All were proud faces there, full of happiness and eager to see Mithali Raj. Young girl cricketers also lined up near the arrival area to welcome their idol.

As Mithali stepped out, loud cheers rang out for her but it also created a chaos. In the meantime, the police helped her to escape the situation in just about five minutes with her parents Dorai Raj and Leela and a few officials of the Sports Authority of Telangana State.

FormerIndia player G. S. Lakshmi, who had also come to welcome Mithali Raj, said,”Mithali is calm and composed but a gritty girl. I have seen her evolve as a player and as a human being too. She has taken the team to the next level and now it’s in hands of the future players to handle it properly and take it further. Mithali was captain material from the initial stages of her career. I wish she continues till the next World Cup as she is fit enough.”