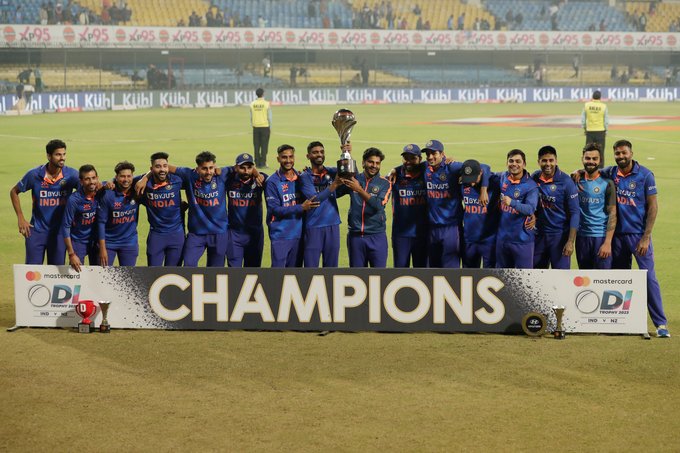 New Zealand came for the tour of IND which includes three ODIs and three T-20IS.

After the first two matches, it was time to sweep the Kiwis.

If they win the last match of the series they will also achieve the first position in the ODI rankings.

The third and final match was to be played in Indore.

Indore stadium is a high-scoring ground as New Zealand won the toss and elected to bowl first.

They both gave a mesmerizing start to the team making good runs.

They both even completed their half-centuries and kept on going.

The IND team got the best start as the Kiwi’s bowlers were stunned by the start.

They both completed their centuries as well when Rohit lost his wicket while trying to hit the ball off the ground.

After the dismissal of Rohit in the next over Shubman also lost his wicket.

After that, the IND line-up wasn’t able to play big innings.

As Hardik Pandya’s half-century gave IND the end they wanted.

IND put up a total of 385 for the loss of nine wickets.

Finn Allen and Devon Conway opened the Innings for the Kiwis.

Hardik Pandya knocking from the first over itself bowled Allen.

Devon kept on going with Henry when he even completed his half-century.

They both made a partnership of 106 runs when Henry lost his wicket.

However, Devon kept on going as he completed his century.

He was looking at the barrier between IND and the top ODI position.

Umran Malik didn’t let the barrier stay for long and he took his wicket.

One after the other fell off wickets started after that as the Kiwis lost all their wickets at the score of 295.