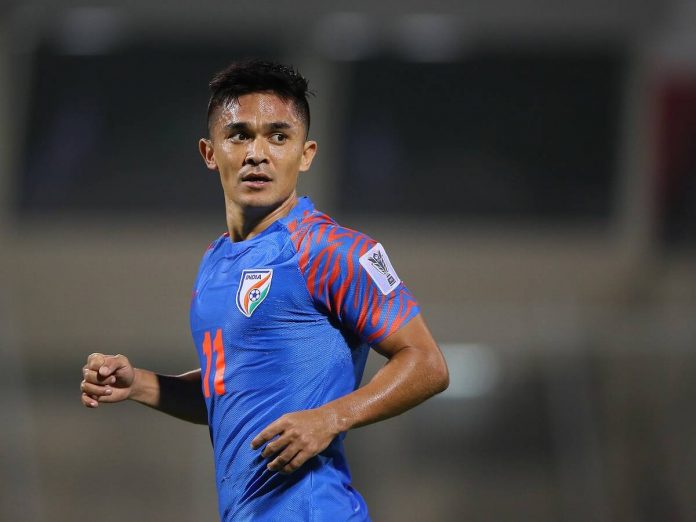 Sunil Chetri believes that they have improved and evolved enormously well and now they are considered as a great competition in Asia. However, this seems just the beginning as the team looks forward to working hard and ease the further journey.

Sunil Chetri has now played over 100 matches for the Indian National Football Team. He made his debut in 2005 when he was only 21 years of age. The captain has come a long way by moving forward from all the hardships and difficulties.

As we already know that the sporting world has been affected a lot by the pandemic and right now being shut has become the new normal. The people not only in India but around the world are waiting for their respective sporting activities to resume. However, conducting or starting an event under the new official guidelines and parameters can be considered as a big challenge.

The good news is that this is where the Indian Football stepped up and conducted the Hero I-league Qualifiers which started on the 8th of October. This was carried out and further was followed by The Hero I-League and Hero ISL. This is the only competitive sporting activity taking place on the Indian land right now.

Sunil Chetri explained that everything is new about Indian Football now. There are many modern methodologies which are compulsory which include the likes of GPS, morning sessions and video analysis. Fans have shown interest as the appearances in the stadiums have increased and the number of viewers watching on the Tv has also increased. There’s a lot of chatter and love from the fans over social media nowadays.

Clubs have also embraced new technologies. Bengaluru FC’s qualification to AFC final in 2016 was a testament of the diligence that was put in since its inception in 2013. Players too became more serious about the way to look out of themselves. They are much more cautious about what to eat and the way to coach during the off-season. During a period of time, all these aspects were not taken seriously. The Indian Football has been directed in the right direction with the help of newly introduced scientific diet and strength and condition. The fitness level of the players has increased due to the presence of coach Luka Radman who brings in huge experience to the side.

Last year we qualified for the AFC Asian Cup after a niche of eight years and beat Thailand in our first match. Later, we held Qatar, one among the highest five teams in Asia, to a stalemate in Doha.
Once they started their World Cup Qualifying campaign against Nepal but no one had trust in the Indian National Football Team. But we played the foremost number of matches to qualify for the Asian Cup. The journey taught us to believe ourselves, to figure relentlessly.
Today we are a troublesome team to play against. We aren’t a pushover, but a force to reckon with in Asia. But, it’s just the start. we’ve to traverse an extended path which is tougher and steeper.