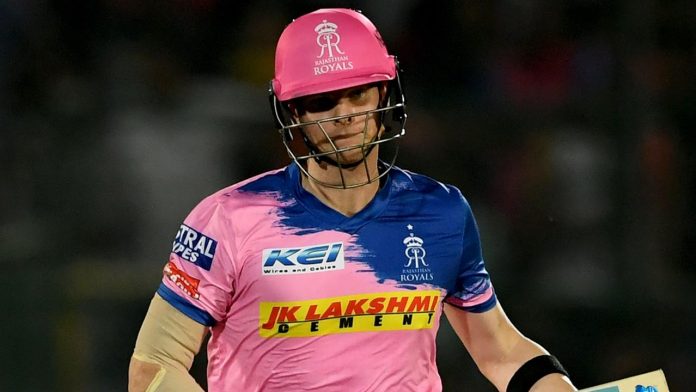 The skipper of Rajasthan Royals Steven Smith has been funded by the IPL as his team was found to maintain slow over-rate during the cash-rich league of Dream11 IPL 2020. This happened during their play against the Mumbai Indians on October 6th as the match was played in Abu Dhabi.

This as the first time that the team of Royals were charged on the IPL’s code of conduct and therefore the skipper was charged with INR 12 lakhs.

The Rajasthan Royals team crumbled against the defending champions as they were bowled out for 136 chasing a target of 194 and lost by a huge margin of 57 runs. The captain could only manage to score 6 runs and was dismissed by the yorker specialist Jasprit Bumrah.

The Royals are up against the Delhi Capitals which will be played on 9th October. With just 4 points from their first 5 matches, they look to charge against the mighty Delhi Side who has been on a roll in this season of the IPL.

Talking about the Delhi Side they are on a trot and on the second position on the points table after trashing Bangalore in a 59 runs defeat.

The men in blue Mumbai Indians are on top of the table with a healthy net run rate of +1.488.

The Kolkata Knight Riders are on 4th whereas Chennai is on fifth after Defeating the Punjab side by 10 runs.

The Punjab side is at the bottom of the table and the Sunrisers are on 6th position.

The skipper of Mumbai Indians Rohit Sharma smashed 35 of just 23 deliveries against the royals and is up and running for the orange cap. The skipper is leading and is on the 4th list of highest run scorers.
Rohit has thus far scored 211 runs in six games at a strike rate of 145.51.
Meanwhile, Kings XI Punjab skipper KL Rahul is on the highest of the Orange Cap leaderboard having scored 302 runs in five games at a whopping average of 75.50 and a strike rate of 141.78. Rahul has also smashed a century and two fifties in IPL 2020 thus far.
CSK opener Faf du Plessis is second within the tally. The man from South Africa has scored 3 fifties and has 282 runs to his name.
After scoring only 26 runs against the Chennai Side Mayank Agarwal has slipped to the third position.
The fifth spot is secured by the skipper of DC as Shreyas Iyer has scored 181 runs in his five matches.

The pacer from Mumbai Indians Trent Boult has moved to the second place in terms of the highest wicket-takers after he successfully picked up two important wickets against the Rajasthan Royals.
He was able to get rid of Samson and Jaiswal.
Overall, the New Zealand pacer has cliched 10 wickets in IPL 2020 thus far, at an economy rate of seven .79 and a strike rate of 10.00.
Jasprit Bumrah for Mumbai is back in action after he took 4 wickets against the Rajasthan Royals. The 26-year-old is currently third within the Purple Cap chart.
Meanwhile, Delhi Capitals pacer Kagiso Rabada climb to the highest of the leading wicket-taker list after he pocketed four wickets against Royal Challengers Bangalore on Sunday.
The youngster was able to get rid of Virat Kohli, Shivam Dube, Washington Sundar and Isuru Udana.
The South African now has 12 wickets to his name in five games and an economy rate of seven .61.
With 8 wickets to his name, the spinner from RCB Yuzvendra Chahal has slipped down to 4th position on the table. However, his position is chased by the pacer from Mumbai James Pattinson after he took 2 wickets against the royals.

On the other hand, Chennai Super Kings have lost against the Kolkata Knight Riders by 10 runs to make the points table even more interesting.