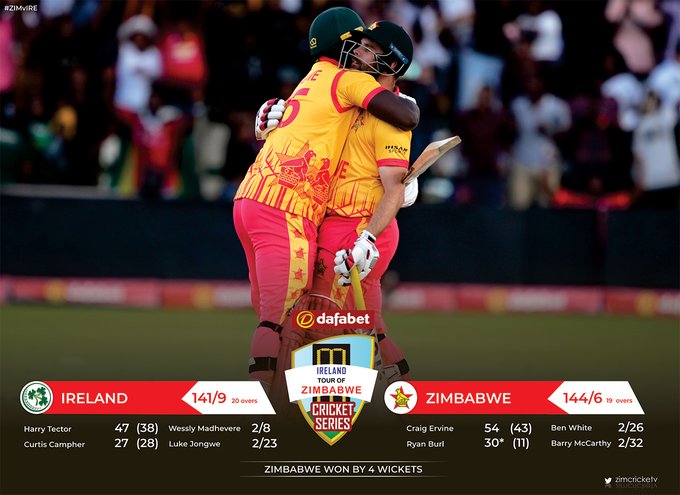 Ireland visited Zimbabwe for the tour of three T-20I and three ODIS.

Zimbabwe won the T-20I series against Ireland by 2-1.

All the matches were going to be played in Harare.

Zimbabwe won the toss and elected to field first.

Ireland batsmen Andy Balbirnie and Ross Adair opened the Innings for them.

The Zimbabwe bowlers didn’t let any of the Ireland batsmen settle down.

They stopped them at a score of 114 runs as Ryan Burl took three wickets.

Craig Ervine and Tradiwanashe Marumani opened the Innings for Zimbabwe.

The openers lost their wickets in the starting overs themselves.

Gary Ballance and Sean Williams’s innings however saved the match.

Their innings made them win the match and take the lead by 1-0.

Ireland won the toss and elected to field first.

Tradiwanashe Marumani and Innocent Kaia opened the Innings for Zimbabwe.

Marumani lost his wicket in the first over.

In return, the opening partnership of Andy Balbirnie and Ross Adair for Ireland made them win the match.

Ross’s knock of 65 runs made IRE win the match by six wickets.

Zimbabwe won the toss and elected to field first.

Ireland’s same order came to open the innings for them.

The top order wasn’t able to give a good start to the team.

Harry Tector’s innings for 47 runs took them to a total of 141 runs for the loss of nine wickets.

In return, Craig Ervine’s half-century made ZIM win the match.

Ryan Burl was chosen as the Player of the series for scoring 53 runs and taking seven wickets.

After the T-20I series, the ODI series will start on January 18th.