Irfan Pathan has been trolled on Facebook by his fans for posting a picture with his wife revealing her arms and face.

Indian cricketer, Irfan Pathan had recently posted a picture with his wife Safa Baig on his official Facebook account. In the pic, Safa is seen showing her arms and face. His Islamic fans found the picture against the Islamic rules and trolled him for being a Muslim and a Pathan and still failing to ask his wife to cover her arms and face.

Irfan posted the photo on Sunday which read: “This girl is trouble ???? #love #wifey.”

This girl is trouble 🙈 #love #wifey

Soon his Muslim fans started mocking him saying that it was not good for a Muslim girl to show her arms like this. While some said that it was Irfan’s duty to make Safa cover her arms and face, people also raised objections saying that Irfan being a Muslim should not post pictures of girls of their families as they are special. Some fans even had a problem with her nail polish and advised her to apply mehndi. Though he was being trolled on a large scale, some fans also stood in his support. 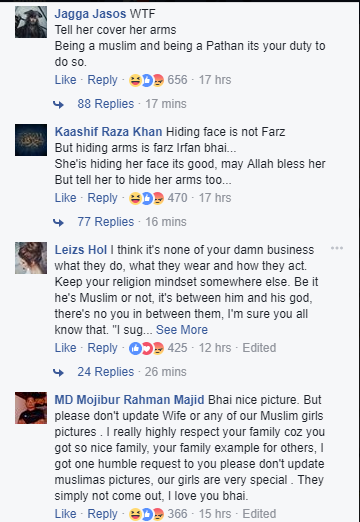 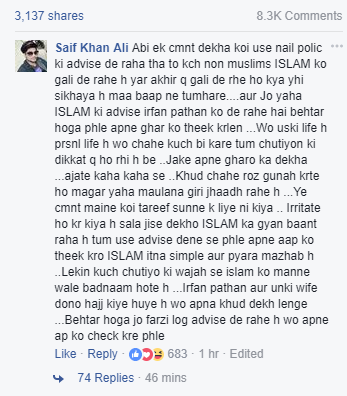 Irfan Pathan married Safa Baig, who is a model from Jeddah on 8th February 2016 and were blessed with a baby boy in December last year. He has not been able to make his comeback in the Indian cricket team for a long time due to injuries. However, he had a short stint with Gujarat Lions in Indian Premier League earlier this year.

Umesh Yadav pursues his father’s dream of getting a government job
Virat Kohli is the best batsman in the world: says Mohammad Amir