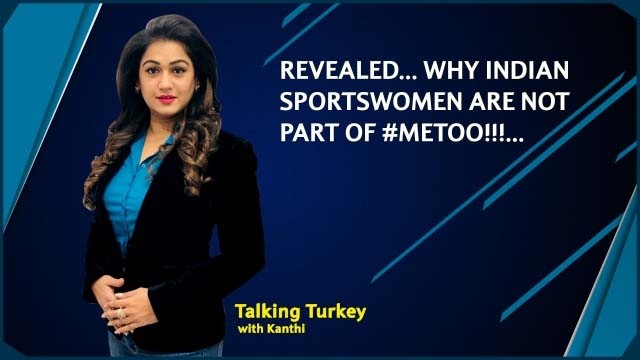 The focus of Kanthi D Suresh, the Editor-In-Chief of Power Sportz this time on her show ‘Talking Turkey’ revolved around understanding the difficulty level of a Sportswoman in India.

The whole show stemmed from the recent brouhaha that broke out in the Women’s Cricket team, with Mithali Raj being dropped in the T20 series, followed by the exit of the Women’s team coach, while the difference of opinions cropped up within the BCCI! When it comes to Women sports in India, it involves too many games, she exclaimed, in her subtle but firm demeanour.

Kanthi started off the show by categorically asking the others as to why no sportswoman figured in the #Metoo movement. What’s the conclusion…. Is it buried under the carpet? she asked in her quintessential style of aggression coupled with her disarming charm. Jaya Sharma, a former cricketer herself, believes that harassment is prevalent in sports, even though the data may not reveal it. Sunita Godara, a marathon runner agreed and added that very few cases get reported, but it exists.

The shocking revelation on the show was the fact that amongst 50 odd National Sports federations present in India, only three of them had a dedicated committee to address sexual harassment issues and headed by a woman for the same.

Discussing pay disparity, in several mainstream sports, Kanthi, meticulously through her research work, brought out the exact differences in the pay across different sports, between men and women. It’s embarrassing to talk about it, she quipped!

Opportunity Disparity was next and it is shocking to know that despite being ranked higher than the men’s team by FIFA, the women’s team does not see any private franchise league events on the lines of ISL.

Media too was blamed for these disparities which Kanthi acknowledged herself, wholeheartedly

Kanthi brought to the forefront the loopholes that exist in the system, -the representation of women in sports federations averages only 3.7%- one of the reasons why women do not feel safe in this realm.

What is interesting to note here is that many of Kanthis shows have seen on ground action. Her recent show on age fraud also has action being taken where 37 parents filed a plea with the Karnataka High court, and the Hon’ble court ordered notices to the Sports Authority of India

Is the on ground action a repercussion of her show or is her show a precursor to an impending action!!!…the doubt still lingers on in the minds of some, but one cannot deny the fact that she is capturing the imagination of many in the realm of sports!

Now, it remains to be seen whether the government will take concrete steps before the elections to ensure that women perceive sports as safe in India, and encourage many more women to take it up as a career.