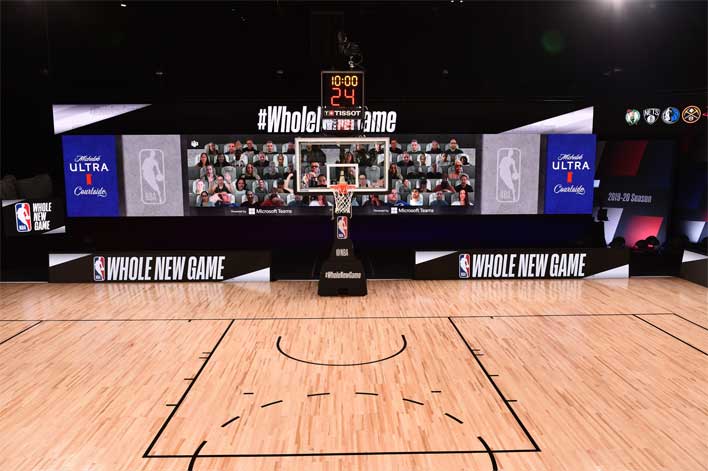 Due to the pandemic worldwide, and for avoiding gatherings many of the favorite sporting events have been missed by the spectators. In the United States, some of the sporting events have been held without any specattors, which certainly changes the environment for the players as well as the fans. The NBA has taken a step in order to help the fans and players to stay connected while the basketball game is on.

Fans would be provided an invitation to see the game which will appear on screen size of 17-foot and fans would be able to interact directly. The main objective of this is to allows fans to get the vibe that they are present with the players, without leaving the safety at their own residence. There will also be an upside for the players on the court, this step taken by NBA would help players to feel the fan energy and support while they play on the field.

Sara Zuckert,  who is the head of NexGen telecast for the NBA, stated that the association is  very much keen and enthusiastic about its new fan experience and has worked on every aspect on the experience with broadcast as well as the technology partners. Zuckert added to the press release, that the aim is to allow fans to engage with each other without hampering the needful to be done for safety and maintain a sense of community as the season restarts. A new Microsoft Teams feature known as  “together mode” would be enabled by the NBA’s fan.

On July 30, the first game which uses technology would be played, tweeted Microsoft. A 17-foot tall LED screen would be present in the court, from three sides of the court the wrapping would be done. From within the teams, the fans will be able to watch a live feed of the game. Microsoft has stated that fans who will join from their homes will be able to fill the energy as the virtual stands would be occupied with people.

Microsoft is trying its best to help the Teams during the pandemic as many of them have switched to the digital platform in order to work and for education. Several new features were added to the Team in order to improve the experience of video call from home.