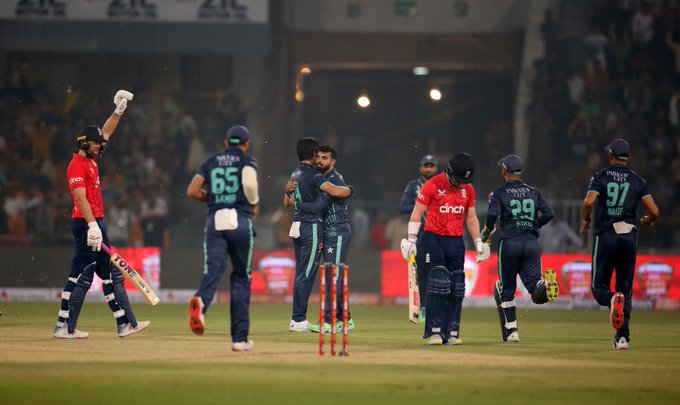 Every country is set for the World Cup and is practicing hard to bring the cup back home.

Many tours are taking place before the World Cup to practice for the big event.

One such tour is an England tour of Pakistan, which contains seven T-20 teams.

After the first two matches played between them, the series has been leveled.

England won the first match by six wickets followed by Pakistan winning the next by ten wickets.

England batting first opened with Phil Salt and Will Jacks.

They both weren’t able to give a great start to the team, as they even lost wickets.

Phil lost his wicket to Mohammad Hasnain, whereas Will lost to Usman Qadir.

Ben Duckett and Harry Brook formed an outstanding partnership of 139 runs and even completed their half-centuries.

Because of their partnership, the English team made a total of 221 runs for the loss of three wickets.

In response, only Shah Masood of Pakistan was able to complete his half-century.

Pakistan lost the game by 63 runs.

Mohammad Rizwan and Babar Azam gave a good start to their team.

As when Babar lost his wicket to Liam Dawson.

Phil Salt and Alex Hales opened for the English side.

England lost his first wicket in the first over itself.

In the next over, Mohammad Hasnain took two major wickets.

The bowlers took all the wickets of the English team and won the match by three runs.

England won the toss and elected to field first.

Rizwan’s knock of 63 runs took them to a total of 145 runs, as England bowlers took all their wickets.

In response, the English team was only able to make a total of 139 and lost the match by six runs.

The series stands in 3-2 as Pakistan is currently taking the lead in the series.

🗣️ The two spinners reflect on what worked for them in the fifth T20I against England #PAKvENG | #UKSePK pic.twitter.com/Hrnoc0cUmG