Going to sleep well tonight. Thank you to everyone for the love and support. It means more than I could possible describe pic.twitter.com/8t0f38vTLB

He won the match with a five-set victory against Marin Cilic. After Margaret Court, Serena Williams & Steffi Graf, Roger Federer becomes the fourth player to win 20 or more Singles’ Titles. Quite an achievement that.

The Swiss player has come under the scanner many a times in his illustrious career and proved himself time and again. Even though the critics criticized him for his increasing age and predicted his downfall, he’s let his performances fo the talking.

“Age is not an issue”, said the Grand Slam winner at the post-match Press Conference.

Like wine, he has only got better with time. The tennis wizard has won three slams in 12 months and is currently ranked at No. 2 in Men’s Singles Tennis by the Association of Tennis Professionals (ATP). This was his 72nd Grand Slam tournament and he ended up winning it. At 36, he has stepped into the second golden age of his career and it can easily be said that he is here to stay and win. 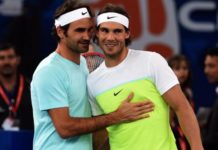