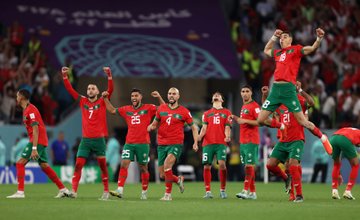 In total 32 teams from around the World cleared the qualifications and made their way to the cup.

The 32 teams were subdivided into eight groups, each consisting of four teams.

After the end of the group stage, two teams from each group qualified for the Round of 16.

Round of 16 started on December 3rd.

The first match of the Round of 16 was played between Netherlands and USA.

It was a must-watch match as the Netherlands won against the USA by 3-1.

The next match was between Argentina and Australia.

Argentina beating the Australian team by 2-1 qualified for the further stage.

Japan and Croatia played the next match and the scores were equal by the end of full-time.

In the penalty shot outs, Croatia won by 3-1.

Brazil marked a massive win against South Korea in the next match.

France the last time the World Cup champion beat Poland by 3-1 to enter the quarter-finals.

England and Senegal played the next match.

English players showcasing their talent won the match by 3-0.

They both ended in zero scores by the end of the full-time.

Morocco marked their spectacular win against great Spain in the penalty shootouts.

By beating Spain, Morocco entered the quarter-finals for the first time.

Portugal and Switzerland played the last match of the Round of 16.

Despite Ronaldo not playing from the start, Portugal’s players performed outstandingly.

Goncalo Ramos became the first player in World Cup 2022 to score a hat-trick.

They beat Switzerland by a difference of 6-1.

The next stage is the quarter-finals of FIFA World Cup which will start on 9th December and end on 11th December.

The first match will be played against Croatia and Brazil.

Followed by the match between Netherlands and Argentina and Portugal and Morocco.

The last quarter-final will be played between England and France.

Last night, the #FIFAWorldCup journey came to an end for @SEFutbol and @nati_sfv_asf.

Thank you for playing a special part at #Qatar2022 👏 pic.twitter.com/U0i0v0jMAd