With the outstanding performance by Jonny Bairstow and Liam Livingston, PBKS keeps chances alive to be in the race to playoffs 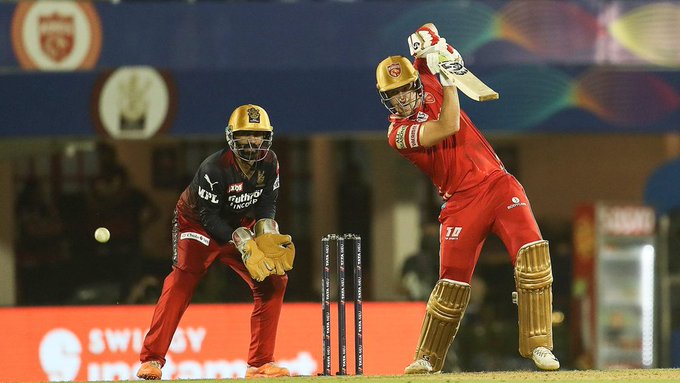 Punjab Kings or PBKS and Royal Challengers Banglore played against each other in match number 60 of IPL 2022.

The last time they both played against each other was in match number 3rd. That was a high-scoring match while in the end, Punjab Kings won the match by five wickets.

After the last high scoring between them, it was expected to see a great match again. Royal Challengers Banglore won the toss and elected to bowl. It was time for the Punjab Kings to put on a high score on the board.

As the openers started to bat the firing shots by Jonny Bairstow hitting frequent boundaries, and sixes gave the Kings a great start. Massive sixes were coming out of Bairstow’s bat as their team even achieved 60 runs in a short interval of time itself. As when Glenn Maxwell took the wicket of Shikhar Dhawan.

The cracking sixes made Bairstrow achieve his half-century in a short interval of time and an outstanding knock of 66 runs in just 29 balls which included seven great sixes made the match worth watching. As their team achieved team 100 runs in just nine overs.

As Jonny Bairstow got out Banglore came back into the game, wasn’t much time when Liam Livingston started to place the ball for mind-blowing boundaries.

Meanwhile, Harshal Patel tried his best in stopping the batsmen of Kings to a low score by taking 4 major wickets. And Wanindu Hasaranga gave two breakthroughs to the Kings team. As they tried hard but the great knocks by Jonny Bairstow and Liam Livingston made their team achieve a huge total of 209 runs for the loss of 9 wickets.

Now it was time for Royal Challengers Banglore to achieve the total. The openers gave them a slow yet a good start but soon Virat Kohli lost his wicket, seems like the bad form is not leaving him. The Banglore team was seen the great trouble as in the very next over Rishi Dhawan took two of the main wickets and give them breakthroughs.

Just after that Rajat Patidar and Glenn Maxwell were seen to handle the team by hitting some great shots and adding quick and valuable runs to achieve the total. In the very next over itself, Maxwell got caught out. After that, there was frequent fall of wickets.

Kagiso Rabada took three major wickets, and Rishi Dhawan and Rahul Chahar took two wickets each and took nine wickets for the Banglore team which won the match by a huge margin of 54 runs.

In the end, Jonny Bairstow of Punjab Kings was chosen as the Man Of The Match for his firing knock of 66 runs in just 29 balls.