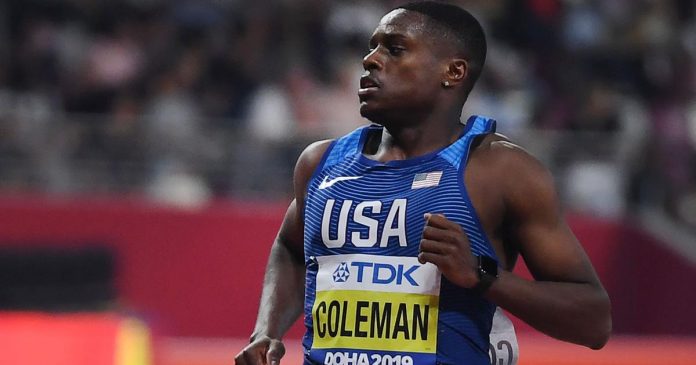 Christian Coleman who is the world champion sprinter will, unfortunately, miss the upcoming Tokyo Olympics as he has been banned from the athletic sport for around 2 years in-depth for the violations of anti-doping. It was announced by AIU on Tuesday.

Coleman is banned by the World Athletics Tribunal for 2 years.
The decision can be appealed within 30 days by the 24-year-old and can be done at the Court of Arbitration of Sport.

He was the favourite to win the 100m gold but it seems that he would miss the Olympics in japan next year.
Four years ago during the Rio de Janerio Coleman ran around the 4x100m relay and is the 60m record holder in the first Olympic that he ran.

The AIU charged Coleman for missed tests in January and December 2019, also as for a “filing failure” last April.
To prove an anti-doping violation, an athlete has got to have committed three whereabouts failures within 12 months.
Before the last Septembers World Championships, it was Coleman who managed to escape suspension on a technicality.
On 6 June 2018, 16 January 2019 and 26 April 2019 those three whereabouts failures were recorded.

Coleman kept his word by saying that the primary missed case should be backdated back to the primary day hat is 1st of April 2018. This proves that the 3 failures have been out of the 12 month period.

Thes test which was missed in December 2019 has been added to the 2 failures of January and April.

Coleman spoke after he was charged in June and said that it was a purposeful planned attempt to make him miss the test.
He had no idea on who showed up on his door without his consent and then later on allegations that he missed the test.
It was verified by the receipts and bank statements that Coleman was out shopping for Christmas when they showed up on his door for the test. It was reported that he is more than ready for the test.
He further said that if a call would have been made to him then he would have been ready and available for taking the drug test by that night.
On December 10th 2019 he was only made conscious about the attempted drug test nut the AIU declared to failed attempt outta nowhere.
According to the Doping Control Officer, there were many knocks made on Coleman every 10 minutes till 1 hour but there was no response.

A doorbell next to Coleman’s door was pressed but no ring might be heard. No plan to reach Coleman by phone was made, consistent with the document.

Coleman also stated that there was no phone call or any doorbell that he could hear. He is surprised because every other time during the test he is contacted by phone but this time it was different.
Even during the quarantine, he has been tested and by now he has been tested multiple times. On the other hand, he was tested 2 days later.
For now, nothing matters for Coleman and the fact that he took drugs or not does matter either.
He also posted the simplest 100m time last year — the 9.76sec he ran to win the planet title.