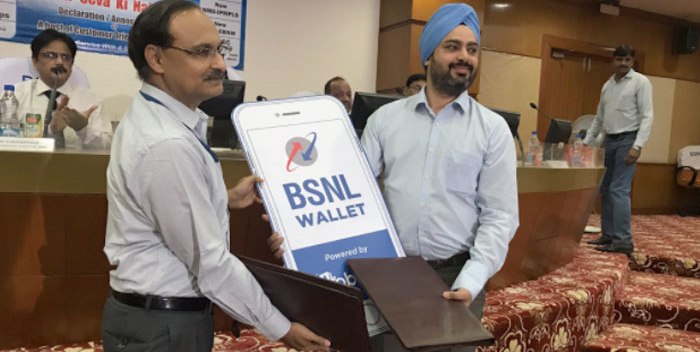 Bharat Sanchar Nigam Limited, the state-owned telecom network, has today announced the launch of its own mobile wallet — BSNL Wallet.

The service has been launched in partnership with online payments startup MobiKwik. It will enable one-tap bill payments for over 100 million subscribers of the telecom service.

The company has revealed that the wallet has been developed and issued by MobiKwik and will only be available to the user of BSNL service. It claims to have over 1.5 million merchants on the network.

Commenting on this, Manoj Sinha, Minister for Telecommunications said,

With this co-branded wallet, the ease of payment will be extended to all the customers while equally strengthening financial inclusion in the rural hinterlands, which often get neglected. Going digital is the need of an hour for both urban and rural areas, and this partnership is definitely a step in right direction.

BSNL is a very big company. They have a 100 Mn subscribers. Making a new wallet for BSNL is about greater convenience to the users and about brand loyalty and building 1.5 Mn retailers on its platform. We will definitely increase our reach with this partnership. We are powering the app, providing front-end and back-end support to the BSNL mobile wallet.

The services for the BSNL Wallet will be rolled out in phases. Currently, users will only be able to perform mobile recharges, and BSNL will introduce other services at a later stage.

This is the second wallet service launched by BSNL. Earlier, in June 2015, the company had launched a similar service named ‘SpeedPay’, which allowed users to send money to other people without a bank account.

MobiKwik was started by Bipin Preet Singh and Upasana Taku in 2009. It claims to have over 60 million users on its platform. It has been focusing on increasing its user-base and partnering with BSNL for the wallet service, it has increased its user-base by a multitude.

The company recently raised Rs 225 crore from Bajaj Finance in a new funding round. As per the reports, it is still looking to raise another Rs 450 crore by the end of this year.