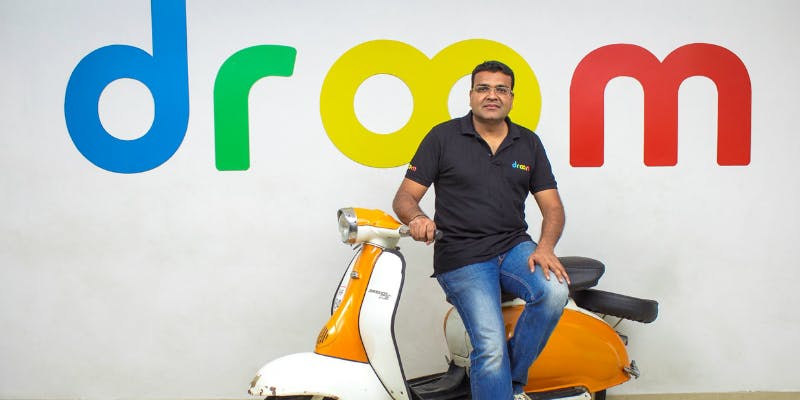 Gurugram-based online automobile marketplace Droom has raised around ₹220 crores ($30 million) in series E funding round, led by the family office of Japan-based investor Joe Hirao. Another Japan-based family fund participated in the round, while the name of the fund remains undisclosed.

The funds raised will be used to strengthen various services on the platform, including, Droom Credit, offering loans for cars and bikes, along with inspection services.

It will also be looking to buyback ESOPs from more than 60 employees, worth around ₹50 crores, and the buyback is expected to be completed by Diwali.

Droom was founded by Sandeep Aggarwal and Rishab Malik in 2014. It provides a platform to enable users to buy and sell old and new vehicles. It offers four marketplace formats, including B2B, B2C, C2C, and C2B. Through the platform, it offers a wide range of products across categories like Bicycle, Car, Motorcycle, Electric Vehicles, Scooter, and Loan & Insurance.

“We have been on a fantastic growth trajectory, which is reflected in the confidence of our investors. We have an annualised gross merchandise value (GMV) run rate of $750 million and are doing $20 million annual revenue run rate,” said Droom founder and CEO Sandeep Aggarwal.

Droom is expecting to be profitable by the second half of 2019, as it has kept its expenses under check. It is also looking to nearly double its GMV to $1.4 billion by the end of 2018, further expanding to $3.5 billion by 2019.

The marketplace’s profitability plan is in line with its plans to go for an IPO by 2020.

While Droom is looking to expand its presence to 100 cities in India, it is ready to launch operations overseas, starting with Thailand and Malaysia, by the end of this year.

Droom last raised $30 million in series D funding round led by Toyota Tsusho, along with participation from Digital Garage and Ellison Investments in March 2018.

Other players in the automobile marketplace domain include CarDekho, Truebil, CarTrade, Cars24, and CarWale, among others.

According to an IBEF report, the Indian auto industry is the 4th largest in the world, with sales growing at 9.5% year-on-year to reach 4.02 million units (excluding two-wheelers) in 2017.