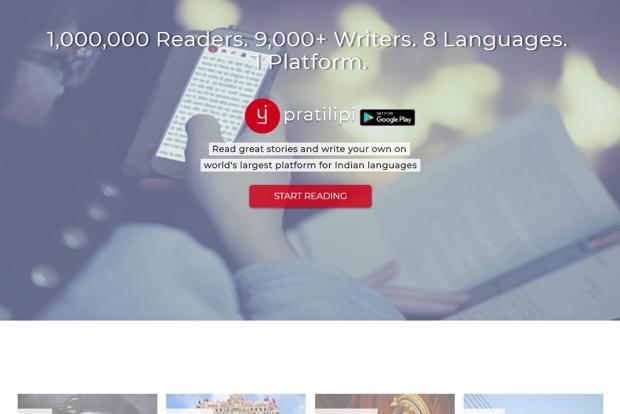 Pratilipi, online self publishing platform based out of Bengaluru, has raised ₹105 crore in the latest funding round led by China-based Qiming Venture Partners. Existing investors, including Nexus Venture Partners, Omidyar Network India, Shunwei Capital, Contrarian Vriddhi Fund and WEH Ventures also participated in this round.

Pratilipi will use the infused funds to improve the technology infrastructure, including its recommendation and personalisation engines, and expand the number of writers on its platform.

It is a platform that enables users to read, write and listen to stories in local languages. The firm was founded by Ranjeet Pratap Singh, Prashant Gupta, Rahul Ranjan, Sahradayi Modi and Sankaranarayanan Devarajan to promote Indian languages.

The platform allow users to publish and read original works such as stories, poetry, essays and articles. It, also, enables readers to rate content posted by others.

In a statement to ET, Ranjeet Pratap Singh, CEO, Pratilipi claimed that the platform has over 5 Million monthly active users and sees every user spending over 40 minutes on the platform through its app. Every month, the platform gets over a million comments and over 2.5 messages are exchanged among users on the platform.

While Qiming Ventures Partners, founded in 2006, is a leading China venture capital firm with offices in Shanghai, Beijing, Suzhou, Shenzhen and Hong Kong.

“In China, we have seen the growth of user-generated content platforms, some of which became the main source of entertainment for millions of internet users,” said Helen Pei-Hua Wong, one of the partners in Qiming Venture Partners.

Over the last couple of years, content based startups in India have been gaining a lot of interest from the foreign investors including the ones from China, Japan, Singapore and US.

A report by KPMG and Google in 2017, had predicted the number of Internet users in India accessing regional language content, spike up to touch 550 Million by 2021.