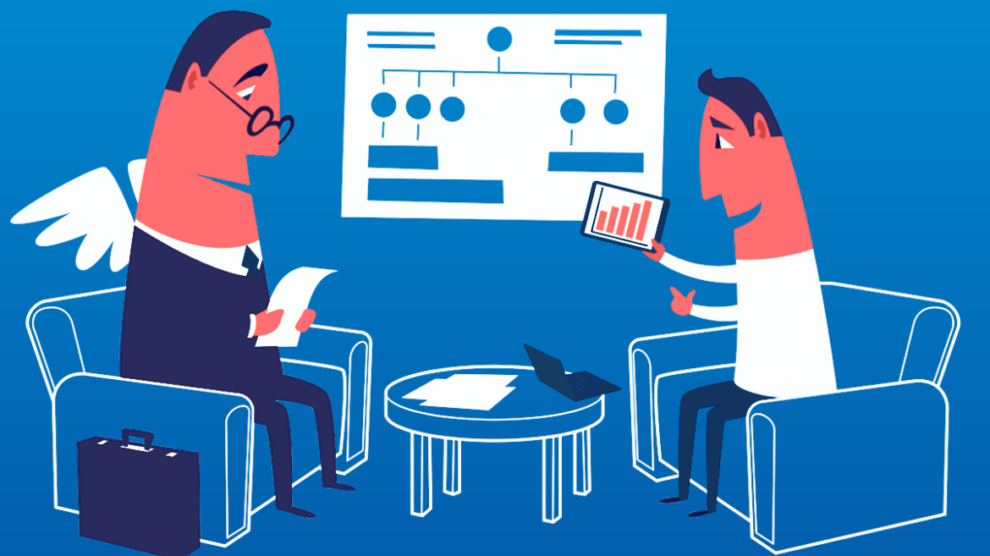 It is a known fact that 90% of startups in India fail within five years of operations. One of the reasons startups fail to reach their sixth year is their inability to raise funds. While a young startup might not be ready for investment from a venture capital firm, entrepreneurs can turn to angel investors for support during their early years of starting up.

Angel investors are often high-networth individuals who have the capital to invest and experience to help early-stage startups to navigate their way. In recent years, more and more entrepreneurs have been able to successfully exit their startups and have turned to angel investment in order to help budding entrepreneurs scale their businesses.

These seasoned entrepreneurs have the right mindset, experience and understanding of the Indian startup ecosystem to help budding entrepreneurs. Apart from providing capital, these angels also offer mentorship and help them connect to the right people in the industry which can play an important role in finding new talent and opportunities for growth.

Here is a list of top 25 angel investors in India who are supporting India’s bustling startup ecosystem:

Rajan Anandan is a well-known name in the Indian startup ecosystem. He is the Managing Director of Sequoia Capital and has worked with numerous technology giants like McKinsey, Dell, Microsoft and Google. His understanding of the technology landscape has enabled him to invest in more than 80 startups. Some of his prominent investments include Dunzo, Unacademy, Capillary Technologies and Lucideus.

Sunil Kalra is a Venture Partner with Stride Ventures and also the Managing Director of Via Projects. He is an active member of Angel List and Indian Angel Network. With more than 100 investments, his portfolio has startups like Lucideus, AdPushup, SimSim and Carmesi.

Sanjay Mehta is the founder of a VC firm called 100X.VC. Prior to founding an investment firm, he was the founder of MAIA Intelligence, a business intelligence and analytics company. He became an angel investor after he sold his company to Datamatics Global Services. He is one of the most prolific angel investors in the country and also loves to mentor entrepreneurs. Some of his successful angel investments are OYO, Box8, LogiNext and FabAlley.

Ratan Tata is a well-respected industrialist, philanthropist and angel investor. He has also bee conferred with the prestigious Padma Vibhushan and Padma Bhushan awards. He was the Chairman of Tata Group, which consists of companies like Tata Motors, Tata Steel, Tata Consultancy Services and Tata Power. His startup portfolio includes names like The Urban Company, Ola Cabs, Urban Ladder, and CarDekho.

Kunal Shah is the founder of CRED, which is a platform that rewards you for paying your credit card bills on time. He is also known was co-founding and online mobile recharge platform Freecharge. This entrepreneur, angel investor and philosophy graduate has invested in more than 40 startups including Unacademy, Karbon Card, Avail Finance and Spinny.

Binny Bansal is the poster child of India’s startup ecosystem. He had co-founded India’s largest e-commerce platform Flipkart. He sold his entire stake in Flipkart in 2018, when Walmart acquired the company in a huge deal that was worth $16 billion. He is using his experience to build his new venture xto10x Technologies. Some of his successful angel investments include Rupeek, Acko, SigTuple, and CureFit.

Kunal Bahl is an entrepreneur and an angel investor. He co-founded Snapdeal and an investment firm Titan Capital. His success as an entrepreneur has enabled him to invest in Indian startups like Shadowfax, LetsVenture, MoEngage and Khatabook.

Anupam Mittal is the founder of the People Group, which consists of companies like Shaadi.com, Makaan.com and Mauj Mobile. He started Shaadi.com in 1997, which has emerged as India’s largest online wedding service provider. He is also an active angel investor with more than 50 investments including Ola Cabs, Druva, StayAbode and DailyNinja.

Rohit Bansal had co-founded Snapdeal, along with Kunal Bahl in 2010. He is another entrepreneur turned angel investor who is using his hard-earned money from his own venture to support emerging startups. His portfolio includes startups like Open Secret, Park+, Bira 91 and Mamaearth.

Padma Shri awardee Mohandas Pai is the Chairman of Manipal Global Education Services and Aarin Capital. He has worked for more than two decades in both the private and public domain. He is also a supporter of the India startup ecosystem and has emerged as one of the most prolific angel investors with investments in startups like ZoomCar, YourStory, ToneTag and Verloop.

Vijay Shekhar Sharma is the iron man of the Indian startup ecosystem. His rags to riches story is an inspiration to every budding entrepreneur in the country. He started Paytm as a digital payments startup in 2010 and has made it into India’s most valuable company in a span of ten years. He believes in giving back to the startup ecosystem that has enabled him a successful entrepreneur. Till date, he has made more than 25 angel investments in startups like Unacademy, Open Secret, Innov8 and Kawa Space.

Rajesh Sawhney is a serial entrepreneur, mentor and an angel investor. He is the co-founder and CEO of foodtech startup InnerChef and also the founder and CEO of GSF Accelerator. Rajesh has made 80 angel investments and some of his portfolio startups are DocsApp, CityMall, ORO Wealth and HackerEarth.

Anand Chandrasekaran is the Executive Vice President of a US-based cloud computing platform Five9. Previously, he had co-founded an IT service management startup called Aeroprise in 2001 and sold it to BMC Software in 2011. Anand has made more than 50 angel investments which include startups like Yulu Bikes, Sheroes, InnerChef, and ToneTag.

Girish Mathrubootham is the founder of India’s SaaS unicorn Freshworks. He had previously worked at Zoho for a decade before he started his own venture in 2010. He is also an angel investor with investment in startups like Whatfix, The Ken, Unacademy and Innov8.

Alok Mittal is the founder and CEO of fintech startup Indifi Technologies. Previously, he had co-founded an online job recruitment platform JobsAhead in 1999. His startup was acquired by Monster.com in 2004, giving him a successful exit. He has made a number of angel investments in India including startups like Pepper Content, Wizikey, and Pando.

Padma Bhushan awardee Kris Gopalakrishnan is the founder and chairman of Axilor Ventures. He was also one of the co-founders of India’s IT giant Infosys in 1981. Being involved in the technology space for over four decades, he has an intimate understanding of how startups can utilise technology to scale and solve problems. He is using his experience by mentoring entrepreneurs at the Startup Village in Kerala. He has also made a number of angel investments in early-stage startups like Vahdam Teas, Verloop, Acko and HungerBox.

Phanindra Sama is a first-time entrepreneur, who founded an online bus ticketing startup called redBus is 2006. He managed successfully sell his startup to the Ibibo Group for $101 million in 2013. He has been using his exit money to help entrepreneurs through angel investment and providing mentoring support. Some of his notable investments include Airmeet, Rheo TV, Unacademy and Fyle.

Arihant Patni is an entrepreneur, investor and a financial advisor. Coming from a business family, Arihant has been interested in entrepreneurship from his early years. His family exited the family business Patni Computers in 2011 and since then he has explored the venture capital industry by working at a number of VC firms. Currently, he is the Director of TheMathCompany. He is also an angel investor with investments in startups like Lido Learning, BHIVE Workspace, Fitternity, and BabyChakra.

Aprameya Radhakrishna is the founder of Vokal, which is a vernacular question and answer platform. Prior to his latest venture, he had co-founded TaxiForSure in 2010 and sold it to Ola Cabs for $200 million in 2015. Till date, he has invested in a number of breakthrough startups like Unacademy, DailyNinja, m.Paani and The Ken.

Sachin Bansal is known for founding India’s leading commerce startup Flipkart and making it a unicorn. He had exited the company after it was acquired by Walmart for $16 billion in 2018. The deal enabled him to rake in $1 billion. Currently, he is using his Flipkart money to work on his new venture Navi Technologies. He is also actively investing in Indian startups. Some of his angel investments include Ather Energy, Ola Cabs, SigTuple and KrazyBee.

Sandeep Tandon is an entrepreneur and an investor, who is known for co-founding FreeCharge in 2010. He had sold FreeCharge to Snapdeal for $400 million in 2015. Currently, he is a partner at an early-stage investment firm Whiteboard Capital. Like many other startup founders, he has turned angel investor and has investments across startups like Unacademy, Spinny, ShaadiSaga and Pocket Aces.

Jitendra Gupta is a serial entrepreneur known for founding India’s leading digital payments company Citrus Pay in 2010. After selling the company to PayU for $130 million in 2016, he continued to work with PayU until 2019. In 2019, he exited PayU to start his new venture Jupiter, which is a neo-banking startup. Being an active angel investor, some of his recent investments include Karbon Card, Mosaic Wellness, Khatabook and YAP.

Padma Bhushan awardee Nandan Nilekani was one of the co-founders of Infosys in 1981. He has held various leadership roles at Infosys including CEO. He is the architect behind the success of India’s ambitious Aadhaar project. Some of the startups in his portfolio include PharmEasy, RailYatri, and ShopX.

Rajul Garg is a serial entrepreneur who had built two unicorns namely Pine Labs and GlobalLogic. Currently, he is the founder and managing director of Leo Capital. He has also made a number of angel investment in startups like Meesho, Lifcare, Sheroes and Shuttl.

Raghunandan G is an entrepreneur, active angel investor and a mentor. He had co-founded TaxiForSure in 2010, along with Aprameya Radhakrishna. Later, the duo had exited the company by selling it for $200 million to Ola Cabs in 2015. With more than 30 angel investments, Raghunandan has been looking to impart his knowledge and expertise to the aspiring entrepreneurs. Some of his notable investments are Bounce, Shop 101 and Skillenza.