Zomato, one of the fastest emerging foodtech startups in India, aired speculations that it may launch a new delivery service with home-cooked meal.

The theory was formed when Zomato India, on its official twitter account, wrote, “Guys, kabhi kabhi ghar ka khana bhi kha lena chahiye (one should eat home-made food once in a while)”. In response to the tweet, Deepinder Goyal, founder and CEO of Zomato, adding little authenticity to the supposition, penned ,”Who did this? Good tweet”. 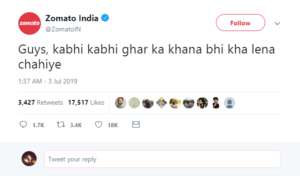 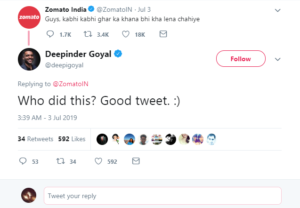 On the other hand, Swiggy, which has a base of 1,000 customers in Gurugram, had launched ‘Swiggy Daily’ that lets people order home-cooked meals prepared by tiffin service providers and home chefs.

The new Swiggy app comes with a subscription-only plan for a period of one day or week or for months.

It is likley that the tweet by Zomato is an indication, it is set to launch a Swiggy-style home-cooked meal service.

Whereas, the company in 2018, faced a controversy where one of its food delivery agent was seen eating the customer’s food in Madurai, Tamil Nadu.

While, a consumer court last week slapped ₹55,000 fine on Zomato along with a hotel for delivering non-vegetarian food to a lawyer who had ordered a vegetarian dish.

Some of the foodtech giants that competes with the likes of Zomato, includes Swiggy, Uber Eats, FoodPanda, Dineout, and many others.