Airtel’s recently launched a new smartphone in collaboration with Karbonn India, which is an entry-level Android smartphone packed with feature rich specifications for the price tag, that the device is being offered. However, the JioPhone, on the other hand, costs effectively nothing, if you follow the rules and regulations from Jio for the next three years from the date of the purchase.

As both smartphones are aimed at the entry-level segment users, who are still stuck with the 2G featurephone and never experienced 4G or internet. So, here is the brief comparison amongst the two models.

Overall price of JioPhone and the services: Starting with the JioPhone, where a user has to pay INR 500 to pre-order and INR 1,000 at the time of delivery must recharge the device with at least INR 1,500 per year, so, if you are going with the standard 150 rupees plan, which offers 0.5 GB of 4G data per day, unlimited voice calls and unlimited video calls for 28 days, then it will costs INR 1,800 per year and INR 5,400 for three years minus the INR 1500 (will be returned if you return JioPhone after 3 years in working condition). So, you can enjoy free calls and data for 3 years in just INR 3,900. However, if you go with the package which offers screen mirroring for JioPhone, then the price will go up to INR 11,124 minus 1,500 making it the effective price tag of INR 9,624.

However, the equation changes a bit, if you return the device within 1 year and 2 years. Assume, if you think that within first 12 months of the purchase, then your INR 1000 + GST will be forfeited, given you have recharged the device according to their norms. If you plan to return the device within 24 months then INR 500 + GST will be fortified given that you have followed the norm (INR 1,500 recharge per 12 months). 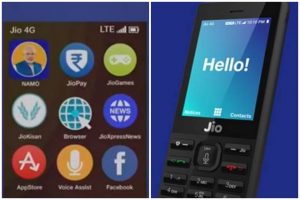 And, finally, after purchasing if you are not using it (not recharging) then, the company has all the rights to take their device by forfeiting the complete security deposit.

As Jio also offer other value-added services like Jio TV, Jio Music, Jio Movies as a complimentary offer. Jio is the best option as one has to shell out at least double that amount to enjoy similar benefits. One more important thing plays an important role is the upfront advance, as anyone can purchase a JioPhone for just INR 1,500, but one has to have INR 2,899 to get airtel smartphone (which has its own advantages in terms of hardware capability compared to JioPhone).

So, if you have INR 3,000 rupees budget for your next phone, going with the airtel smartphone will make sense, so, here is the specs comparison of the same.

The Airel smartphone from Karbonn offers a 4.0-inch capacitive touch display versus the 2.5-inch non-touch display, which is from the lost generation. So, using the touch screen is always fun compared to the non-touchscreen controls. Even watching movies, YouTube videos will also be more real life like in the Airtel smartphone due to 4.0-inch touchscreen. 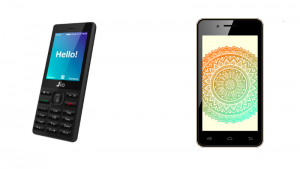 Coming to the ecosystem, here also Airtel smartphone overshadows the JioPhone. JioPhone is powered by Kia OS, which is a new operating system built to support Jiophone, so, the app ecosystem is still new and doesn’t offer important applications like Facebook, Instagram, Twitter, and Whatsapp. On the other hand, the Airtel smartphone is powered by Android Nougat operating system, which offers more than 2 billion apps and a lot of content to enjoy.

In terms of battery, the JioPhone offers a 1500 mAh Li-ion battery, however, the JioPhone packs much bigger 2500 battery. Considering the smaller screen and high capacity display, JioPhone is expected to last longer compared to the Airtel smartphone, so, if your main concern is battery and looking for a phone with standard features, then go with the JioPhone.

On the camera compartment, both models offer similar camera features with entry-level front-facing selfie camera and a rear-facing camera, so it’s a win-win situation for both the models. So, depending on your budget and requirement go for the best option that you can afford as well as that matches your requirements. 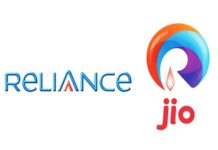 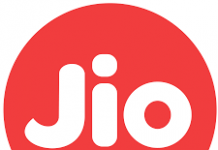