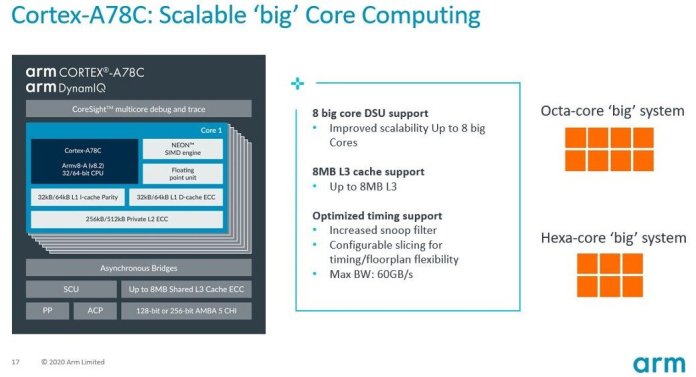 The new Cortex-A78C core of ARM is based on the recently launched A78. The company has insisted that it diversified the audiences for the series with this core. It has been optimized for high performance and heavily threaded workloads.

This all-new C variant is compatible with Mali-G78 GPU like the A78. It has geared towards various formations in one DynamiQ arrangement. A78 can conform to big.LITTLE architecture.

Around 8 of its C sibling can be used for creating an all-big chipset without the requirement of A55s and X1s. This particular concept can handle the next-gen demands of what they call “digital immersion”. The applications range from productivity-focused tasks to virtual or augmented reality gaming.

ARM is adamant that CPU which is based on Cortex-A78C core will be ideal for prosumer to enterprise grade portable devices like laptops or gaming headsets. A78, on the other hand is best for smartphone SoCs. It also sounds like they might be attractive to OEMs at the mobile gaming space. Time will tell where the new CPU cores would end up.