According to rumours, Google is working on a smartphone named Pixel Pro, which is yet to be discovered by the leakers. In terms of design, the Google Pixel 2 and Google Pixel XL 2 resembles the last generation Pixel smartphones, with the same dual-tone design as well as the dual-tone back panel remains the same. The Pixel 2 and the Pixel XL 2 will be offered in three colours shades (White, Black and Blue).

On the front, we get to see a lot more things than on the back. The Google Pixel 2 and Google Pixel XL 2 now comes with a dual front-facing speaker setup with stereo speaker solution. In terms of display, the device follows the market leaders and offers an 18:9 cinematic aspect ration screen with narrow bezels and a 2.5D tempered glass protection. On the first sight, the device looks like a Samsung Galaxy S8 without curved display. 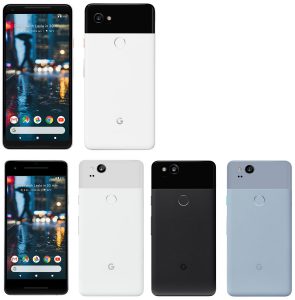 According to the latest news, the Google Pixel 2 will be manufactured by HTC and the Google Pixel XL 2 will be manufactured by LG. As expected, these devices will offer Android Oreo 8.0 out of the box with stock Android user experience and will continue to receive Android updates for two more years. In terms of camera capability, the device just offers a single shooter (as per the renders are concerned), as most of the prominent players are moving towards the dual camera solution?

The Pixel 2 will feature a 4.9-inch FHD display and the Pixel XL 2 will offer a 5.9-inch QHD+ IPS LCD screen with cinematic aspect ratio. Under the hood, both devices will be powered by Qualcomm Snapdragon 835 Octa-core SoC, paired with 4 GB LPDDR4 RAM and 64 GB or 128 GB of onboard flash storage with a dedicated micro SD card slot (up to 128 GB). Don’t expect these devices to feature an SD card slot, as none of the Google smartphones has an SD card slot ever.