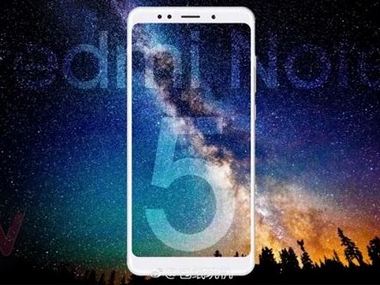 We are all waiting for the upcoming premium mid-range smartphone, the Xiaomi Redmi Note 5, which will be the successor of the Xiaomi Redmi Note 4. Now, the recent leaks have taken away our excitement for a lot of reasons, and here are some of those points, which make this update pointless.

For the first time, we are not impressed with the update, instead of the Redmi Note 5, it feels much like the Xiaomi Redmi Note 4T, and, here are points that can back up our “contradictory” statement.

The teaser picture, which was posted on the Weibo’s Xiaomi official account is something similar to that of the Xiaomi Mi MIX 2, with a colourfull sky on the background and a smartphone with very narrow bezels. At least on the paper, these specifications make us happy and offer a lot improvement over its predecessor. Not to forget its 5.99-inch edge to edge 18:9 aspect ratio super laminated display with very narrow bezels, which gives a premium look for the smartphone. However, the happy story ends here and the sad story begins.

The upcoming Redmi Note 5 is powered by Qualcomm Snapdragon 625 Octa-core SoC, which is the same Mobile Solution that is featured in Xiaomi Redmi Note 4, Xiaomi Mi MAX 2, and the latest Xiaomi Mi A1. This energy efficient chipset will be paired with either 3 GB or 4 GB LPDDR3 RAM with 32 GB or 64 GB onboard flash storage with a dedicated micro SD card slot (up to 128 GB). Though, this is one of the best energy efficient chipsets, when it comes to daily usability it does offer a niche performance, but, when it comes to highly demanding tasks like playing 3D games, vigorous multi-tasking, the smartphone powered by this processor stutters. This phenomenon has been confirmed on one that one device which uses the same processor. Even with respect to the camera, the leaks suggest that the smartphone offers a single 12 MP rear-facing camera with PDAF and 1080p video recording capability. For the selfie camera, the company is expected to use a similar 5 MP camera with fixed focus capability, which makes us believe that, this sensor has been borrowed from Redmi Note 4 or Redmi Note 3.

In terms of operating system, the device runs on a custom version of Android OS (MIUI 9) based on the Android Nougat 7.1.2 operating system out of the box with an expected update to the Android Oreo in the near future. The battery capacity remains at the 4000 mAh, so does the connectivity features. Just like the any Xiaomi Redmi branded smartphone, this smartphone is also expected to feature dual SIM card slots with 4G LTE and VoLte capability on both the SIM card slots.

So, these are the reasons that we called this as a Redmi Note 4T, as it looks like the company has just upgraded the display and kept the remaining tech specifications intact. Coming to the pricing, as Xiaomi India has made a permanent price cut on the Xiaomi Redmi Note 4 variants, the 32 GB and the 64 GB Redmi Note 5 or the Redmi Note 4T are expected to retail for ₹10,999 and ₹12,999 respectively.