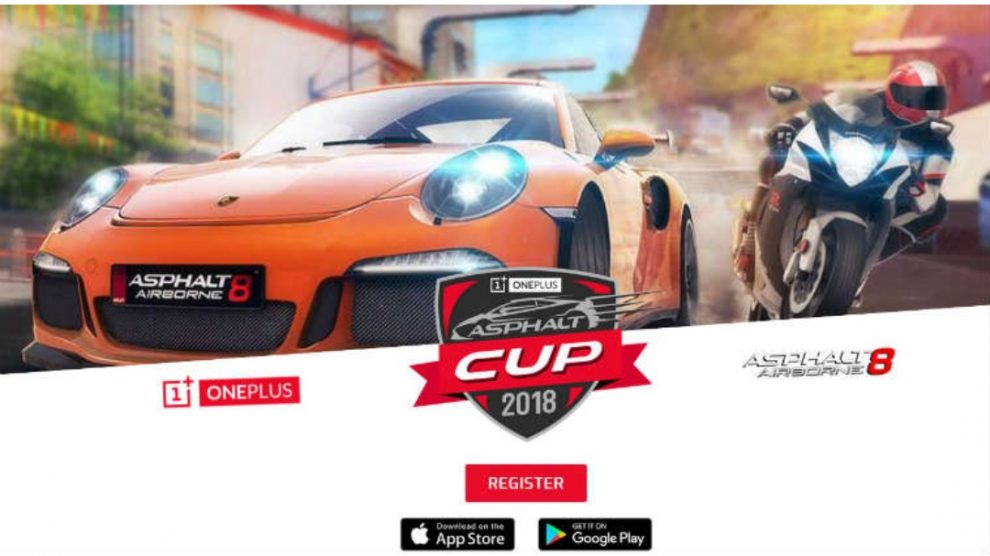 OnePlus and Gameloft are in partnership to launch a new racing championship ‘OnePlus Asphalt Cup ‘. An exclusive gaming event launch is considered to be a smart move by OnePlus to promote the power of it’s recently launched smartphone OnePlus 6 .

They are organizing a series of tournaments based on Asphalt 8 : Airborne, which will be held between June 13 and July 8. With over four weeks, gaming event divided into four sets each with a period of 5 days.

The company claimed that the top 5 winners in each week will receive OnePlus Bullets Wireless headphone, which each of other top 25 winners will receive goodies from OnePlus and Gameloft. In the end, Top 3 winners will receive a combined price worth 9 lakhs. The first prize winner will receive 5 lakhs, second 3 lakhs, and third 1 lakh. The total prize money for the tournament is about 12 lakhs. OnePlus tweets that,

The OnePlus Asphalt Cup is here. Race to get your hands on a prize pool of over INR 12 Lakh, including the OnePlus 6 and exclusive OnePlus merchandise. Hit the road on the 13th of June.

If you play you can also receive some cash as in tournament has made a chance for everyone who participates in this event will receive in-game rewards worth ₹2 Crore every match. But a remarkable approach, which seems tempting that all the participants are allowed to play unlimited times to become the top scorer of the event.

“Bringing together the newest technology and raw performance of OnePlus 6 in association with Asphalt 8, the best mobile racing title by Gameloft, ‘OnePlus Asphalt Cup’ is dedicated to the gaming community in India,” says  Vikas Agarwal, General Manager

The fans are extremely interested in the event to showcase their hidden gaming talent in the arena .