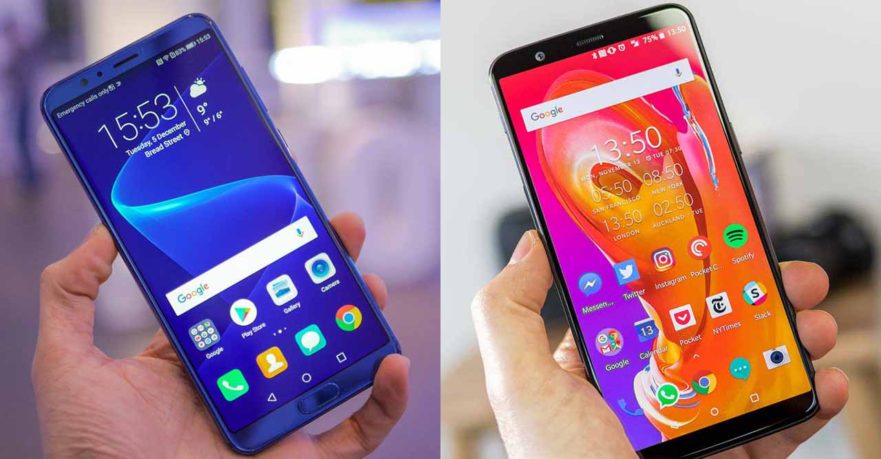 This year, OnePlus 5T was the most unprecedented flagship smartphone of the year (period), but when we saw and experienced the Honor View 10 our verdict has changed. In fact, it’s a tough task to choose between these models and we are here it makes it easy.

FYI: Do note that, the Honor view 10 is coming to India on 8th December and our views are purely based on a review unit. The phone is rumoured to be priced under ₹33,000 (same as the 6 GB variant of the OnePlus 5T). This is the initial impressions and keeps in touch with The Indian Wire for our final verdict (will be out before 8th January).

Design and Built quality: The premium market has settled for glass-metal-glass sandwich design, however, these two players have struck up with a metal unibody design with 2.5D curved tempered glass on the top. The metal has an advantage over the glass with impact resistance and heat dissipation. However, it does miss that “X” factor and to be frank the design looks a bit boring. One thing that we have for sure is the rear camera bump. In fact, the camera bump on both models is prominent and one has to use a case to stock the device from rocking. One thing that we liked about the Honor View 10 is the placement of the fingerprint scanner. As a matter of fact, this is the first smartphone to feature 18:9 aspect ratio display with a front-facing fingerprint scanner. The OnePlus 5T is the first OnePlus smartphone to offer a rear-facing camera. The smartphone makers have taken a different approach with the scanner and we like the odds with the same. In terms of design, we think the Honor View 10 has an edge over the OnePlus due to fingerprint scanner and a thumbs up (oops!!!, this article is not sponsored by “Thumps Up”).

Processor and RAM: OnePlus 5T and the Honor View 10 are miles apart when it comes to processors. However, both Mobile Solutions has a single agenda i.e, to offer unprecedented user experience. The HiSilicon Kirin 970 is based on 10 nm FinFET architecture, so does the Qualcomm Snapdragon 835. These processors are the top of the class processors (period) which represents the Mobile processors and its capabilities. From day to day usage to heavy multitasking, these chipsets will not be compromised by anything. Combined with 6 GB LPDDR4x RAM and flash storage based on UFS 2.1, these smartphones will drive any uphill task like a Range Rover. We would also like to mention the fact that, Hisilicon Kirin 970 is the first Mobile processor to offer dedicated Machine learning chip to offers unprecedented AI features. Both processors score over 1,50,000 points in Antutu benchmark and there is nothing that these processors cannot process. Over the year, the Huawei has pioneered in Mobile Processor and this would be a tie in this instant with these Mobile Solutions. Do note that, Honor View 10 does support external SD card up to 256 GB and there is no provision to use micro SD card on the OnePlus 5T.

Display: This is the factor that makes a flagship a true flagship. Apple, Samsung, LG, and Google has settled with 2K QHD resolution display and these smartphone makers have opted for FHD+ resolution display over QHD display to offer better battery life. In real life, both displays offer punchier colours and vivid viewing angles. However, the Organic OLED panel offers punchier colours and offers better battery life on any day. This doesn’t mean that the Honor View 10’s display is of bad quality, but the Organic OLED display from Samsung is a much-evolved display with an edge over LTPS LCD display on the Honor View 10. Without any doubt, the OnePlus 5T takes lead when it comes to screen quality.

Camera: These phones calls themselves as flagship smartphones and packs a dope tech when it comes to the camera. However, compared to the premium flagship smartphones, the is a humongous different in the camera quality. However, these smartphones do not have bad cameras, but these are no match for the cameras on the Samsung Galaxy Note 8 or Apple iPhone X that all. The OnePlus packs a dual 16 MP + 20 MP RGB camera setup with EIS and F/1.7 aperture. The phone uses the main 16 MP sensor to capture the photos when the light availability goes to less than 10 lux, the secondary 20 MP shooter kicks in to capture better photos in low light. Due to this, we miss x2 optical zoom via the telephoto lens and there is no way to select the secondary camera manually. The front-facing camera on the OnePlus 5T is one of the best selfie cameras on the market. On the other hand, the Honor View 10 offers a similar 16 MP + 2o MP camera setup with a F/1.8 aperture on both the sensors, however, in this case, the secondary sensor is a monochrome sensor, which helps to capture details and to produce a varied depth of field. Both cameras lack on OIS and depend on EIS for video stability. In fact, the OnePlus 5T nails 4K video recording capability by cutting stutters and shake. The Honor View 10 is also capable of recording 4K video and does a decent job. The main highlight of the Honor View 10 is the fact that, it uses Ai to detect the scenes to give you a perfect picture every time. However, in low light, the device struggles a bit and the company has promised a software update to fix this issue in the near future. If you are into photography, then the Honor View 10 has a lot of potentials and if you into videography and vlogging then OnePlus 5T might be the smartphone for you. Both phones offer face unlocking feature and it works great without any problem what so ever. Smartt features like notification access for the right user is a nice add-on and it works almost every time.

Software experience: This is where these devices are a continent apart. After ditching Cyanogen Mod, OnePlus had mastered the art of stock android OS and calls it as Oxygen OS. The only sad thing about this is the fact that OnePlus 5T’s Oxygen OS is based on Android Nougat and the Oreo update is around the corner (expected to seed around Janurary 2018) The OnePlus 5T is no new for this, in fact, after Pixel 2 this phone offers smoothest software experience with overall smooth transitions. The company has made sure to add necessary features like dual apps and gestures to improve the overall user experience. Considering the simplest UI, the phone runs like a Ferrari every time you pick it up. On the other hand, Honor is keeping up with its own version of OS based on Android Oreo called EMUI 8.0. The EMUI is a completely customised OS which is nowhere near stock Android experience. The Honor View 10 comes with its own set of apps for everything and some of the apps overlap over the stock Google Apps and just consume storage for no reason what so ever. We pick Oxygen OS on any given day and it depends on the individual to go with EMUI or Oxygen UI (depending on previous encounters). Both smartphone brands have promised to update these devices to the next major Android operating system and we are sure about the same.

Battery: The Honor View 10 packs a massive 3750 mAh Li-ion battery with fast charging capability via USB type C slot. The phone can easily last for a complete day without any problem and one can charge the smartphone from zero to 100 percent in less than 120 minutes. The OnePlus 5T comes with a slightly smaller 3300 mAh battery. To complement the smaller battery, OnePlus 5T has the best charging technology. The Dash Charger can change from nothing to 100 percent in less than 90 minutes. One thing to mention here is the fact that, the device doesn’t even get warm and the charging won’t slow down even if you are using the device while charging. So, one has a slightly bigger battery and one has a slightly better-charging technology, so, they have their own advantage and disadvantage. Do note that, the Organic OLED display on OnePlus 5T requires less juice compared to the one on the Honor View 10 with LTPS LCD screen.

Whats missing? We might restrain ourselves to call these smartphones as the true flagship smartphones due to these factors. Both phones miss out on QHD+ display, this will not bother for a normal user, but if you are into VR then you will see the difference. The missing of wireless charging capability does bring down the standard a bit. Finally, both devices miss out on any type of IP rating, so, if you drop your phone in a toilet or get it wet in rain, then get ready to head towards service centre.

Conclusion: These two smartphones have a lot of potentials and for the price that they are asking there is no bargainer what so ever. So, based on the above-mentioned drifts if you are into Display, stock Android, videography then go with the OnePlus 5T. If you are into photography, AI, build quality then go with the Honor View 10. So, which one is you pick amongst these two smartphones? Share your view in the comment box.

Digmine malware might steal your Bitcoin via Facebook messenger
Oppo A83 with 5.7-inch 18:9 display unveiled in China For 1,399 Yuan