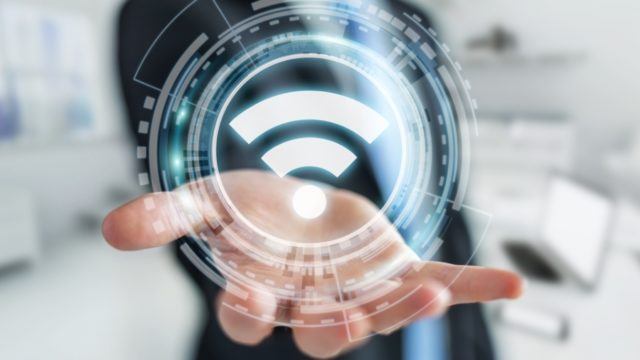 A newly discovered method for transmitting radio frequencies wirelessly might bring us a step closer to a future with ultra-high-speed WiFi. Researchers at the Harvard School of Engineering and Applied Sciences have recently developed a method which uses Laser Radio Transmitter to wirelessly transmit radio frequency via a semiconductor laser. Lasers can be used to emit microwaves, modulate them and receive external radio frequency signals — thus opening up a whole new possibility of achieving “ultra-high-speed WiFi.”

So basically, this device uses a frequency comb laser to emit and modulate microwaves wirelessly. While conventional lasers are able to emit single frequencies of light at a time, the laser frequency combs used in the new method are able to emit multiple frequencies at the same time. The laser uses different frequencies of light beating together to generate microwave radiation. The “beats” emitted from the laser are reminiscent of a painting (right) by Spanish artist Joan Miro’ named “Bleu II”. The researchers used this phenomenon to send a song wirelessly to a receiver.

It was found that “different frequencies of light beat together to generate microwave radiation.” The light inside the cavity of the laser causes electrons to oscillate at microwave frequencies (within the communications spectrum). These oscillations can be externally modulated to encode information using a carrier signal. For the first time, such functionality has been demonstrated in a laser.

The researchers also demonstrated how they transmitted these Microwaves:

“The first thing the new device needed to transmit microwave signals was an antenna. So, the researchers etched a gap into the top electrode of the device, creating a dipole antenna (like the rabbit ears on the top of an old TV).  Next, they modulated the frequency comb to encode information on the microwave radiation created by the beating light of the comb. Then, using the antenna, the microwaves are radiated out from the device, containing the encoded information.  The radio signal is received by a horn antenna, filtered and sent to a computer. The researchers also demonstrated that the laser radio could receive signals. The team was able to remote control the behavior of the laser using microwave signals from another device.”

This discovery could become the key to achieving Wi-Fi speeds hundreds of times faster than today’s wireless internet services.