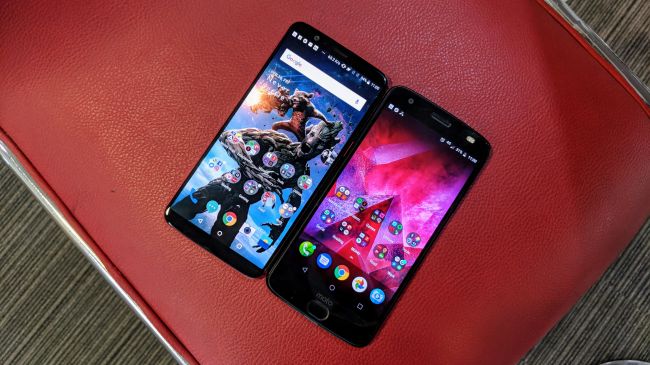 Moto Z2 Force, a Lenovo owned Motorola Smartphone which was launched at the price of Rs. 34,999 in India. Comparatively, the phone was considered too expensive in the US. There are many models which are offering much competition in this price range, likes of the Xiaomi Mi Mix 2, OnePlus 5T, Nokia 8 and Samsung Galaxy A8+.

However, OnePlus 5T is definitely a standout competition to the Moto Z2 Force. OnePlus 5T with the sleek design, dual cameras, flagship grade internals and an edge-to-edge display of 18:9. But, both the phones stand stiffly in their own market. Let’s just find out which ones got the groove in the market!

Display
The Moto Z2 Force offers a high-density 5.5-inch QHD display which offers the well-defined colors to the user. Moto has got the five-layer shatterproof display which enables your rich experience for multimedia usage without any crack in case of falls. Both the Models has got their own pros in the Display segment. Moving up to the OnePlus 5T, it has got a 6-inch FHD display with the AMOLED display with 18:9 ratio. It gives the vivid display that flows edge to edge, even the Gorilla Glass endure much premium than Motorola lenses.

Performance
Both of the phones run on Snapdragon 835 processor powered by Adreno 540 GPU with 6 GB RAM. There is hardly any difference between both the phones in terms of speed and performance. Both of them can handle multiple tasks simultaneously. However, OnePlus 5T offers a soothing and better experience to the users, the fingerprint sensor also works classy as well.

Operating System and Software
Motorola runs on the stock Android 8.0, Oreo whereas the OnePlus 5T has its own custom OS known as Oxygen OS based on Android 8.0. Oxygen OS is very light and easy to use in terms of usability and experience in terms of Stock Android. The Motorola OS gives you many additional features such as Gestures, Moto Display, Moto Voice and a feature for night display mode. The choice will differ as the Moto will feature you with the latest Android on the go, whereas OnePlus gives you slight much customizability with the Oxygen OS.

Camera
Both the models come up with the setup for Dual Cameras. The Z2 Force has the 12mp dual camera at the back which captures images with depth of field effects with low light shots in the night. Moreover, The 5T has sporting 20MP+16MP sensors which again give you the option specifically for low light photography. Moving up to the front camera, the Moto Z2 Force has a 5mp sensor with the Dual-LED flash whereas the OnePlus 5T has got the 16mp sensors. The OnePlus 5T has the fine and dynamic color contrast with the lesser time for photo processing. The images from 5T at night looks sharper and the noise remains eliminated.

Battery
OnePlus 5T has won this segment as it offers 3300mAh, which is much better than Moto Z2 with 2730 mAh. Whereas, the MOTO India is on the verge of delivering a Moto TurboPowerPack Mod which can double the performance of the Moto Z2 with the moderate as well as intensive usage. OnePlus will offer 8 hours 27 minutes, whereas Moto will endure for 7 hours 41 minutes in daily use.

Since the OnePlus 5T looks more convenient as it offers a much intensive camera combination, fast processing with the more vivid display. Moto Z2 has got the advantage of its TurboPower mod, which remains the only option to go for OnePlus 5T. However, both the phones are already as the best mid-range smartphones in India for 2018.

WhatsApp Payments beta launch nets NPCI nod, but only for one million users
Top 5 dehumidifiers in 2018