Nokia is launching a new premium flagship smartphone in China. However, there is no information on the exact model number or the price tag of the device. However, from the recent leaks and rumours, the device that is being offered from the Finnish smartphone maker. Is this the Nokia 7?

As the press release shows a Bothie feature, this might be the next Android flagship smartphone from the OME. So, here is the speculated specifications list for the upcoming Nokia smartphone. According to analysts, the company might launch an improved version of Nokia 8, with 6 GB RAM and 128 GB onboard flash storage with a dedicated micro SD card slot. 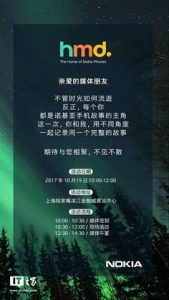 The Nokia 7 is expected to feature a 5.2-inch 1080p IPS LCD panel with Corning Gorilla Glass protection on the top. Under the hood, the device will be powered by Qualcomm Snapdragon 630 or 660 Octa-core SoC, paired with 4 GB LPDDR4 RAM and 64 GB onboard flash storage with a dedicated micro SD card slot (up to 128 GB).

In terms of operating system, the device is expected to run on Android Oreo 8.0 with stock Android user experience. The device might also offer a 3000 mAh Li-ion battery with fast charging capability via USB type C port. To know more about this device, one has to wait for few hours.